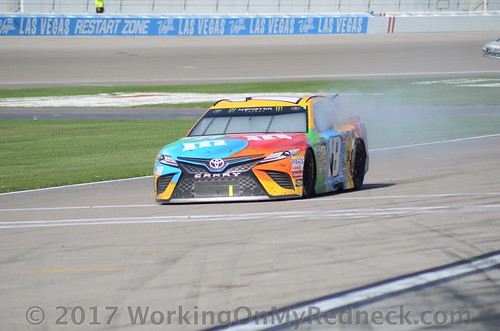 This week NASCAR rolls into their last short track race of the 2017 season, Martinsville Speedway.  Even though the short track racing has not sparked any lost tempers, bruised egos, or an excessive amount of crumpled sheet metal so far this season, Martinsville could be the place where all that could change Sunday.  Likewise, I am no too aware of any driver needing to collect a little revenge or extract some retribution, but that really does not mean that there may not be any pay backs coming this weekend.

Nearly one quarter of the fantasy league, five players in total, are jumping on the Kyle Busch bandwagon at Martinsville.  Those five players includes Edie The Las Vegas Super Star, Bobby Blue Crush, Carlton The Doorman, ol Skid-Marc, as well as Doug The Gandy Candy Man.  All five seems to think that this is ol Rowdy’s best chance to punch his ticket through to championships at Homestead.

Meanwhile, Kathy The Church Forecloser, Cole The Redneck Understudy, Zee, aka Sissy and Linda The Cookie Mom are solidly in the corner of Mr. Seven-Time, Jimmie Johnson, at Martinsville.

With A&M Aggie Sue, Jerry The Buschwacker and Jeremy The Coach on his side at Martinsville, Chase Elliott will be trying to notch his first MENCS victory in the HMS No. 24 Chevy.

There are three drivers who have a support group of two players each.  Leading the pack this week is Denny Hamlin who has Karen The Highly Opinionated Southern Bell and Dan The Numbers Cruncher onboard with him.

Additionally, Lonna The Quilt Angel and David The Mudslinging Throttle Jockey are rooting for Matt Kensenth to notch his first 2017 win, and be a spoiler in the Round of Eight.

Lastly, Snoopy Dawn and Leon Your Most Humble Sheriff are all in with “Blazingly Bad” Brad Keselowski at Martinsville.

As was mentioned in the opening paragraph of this post, the short track racing this year has, so far, been relatively quite and calm.  If I was a betting man I would put my money on a little more driver/crewmember activity/interaction at Martinsville!  With that being said I would surely hope that all crewmembers check their egos and at the weapons at the pit gate Friday and “keep their hands to themelves”!.

TIL NEX TIME, PULL YOUR GLOVES UP, FLIP YOUR VISOR DOWN, AND LET’S GO RACIN’!