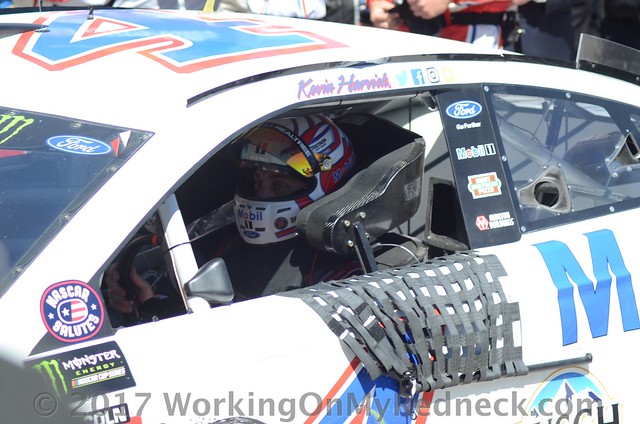 Harvick led five times for 38 of the 334 laps in the AAA Texas 500, his Stewart-Haas Racing No. 4 Ford holding a 1.580-second margin of victory at the finish. Harvick’s second win of the season was his first on the 1.5-mile Fort Worth track and the 37th of his Monster Energy Series career.

This week we have just one player who was reading her tea leaves correctly.  Lonna The Quilt Angel saved up her Kevin Harvick choice for just the right race, the AAA Texas 500!  The Quilt Angel added 59 all important points to her 3rd segment totals.

Not far behind The Quilt Angel this week on the scoring pylon is Bobby Blue Crush.  Ol Blue Crush was riding shotgun with the hottest driver of the 2017 NASCAR season, Martin Truex, Jr., who was the bridesmaid to Harvick this week, but rewarded Blue Crush with 51 points.

Both A&M Aggie Sue and Jerry The Buschwacker conspired together choosing Ryan Blaney this week.  When the checkered flag flew at Texas,  Blaney crossed the line with a 6th place finish and put 42 points in their column.

Notwithstanding the latest news regarding the 2003 Cup champion, Matt Kenseth, publicly stating that he has nothing next year and that this was his last year in NASCAR, Kathy The Church Forecloser rallied with her man, Kenseth, adding a nifty 40 points to her totals.

Rounding out the top five scorers this week is Jim, aka Chiefy.  Ol Chiefy had all his marbles on the polesitter and track record holder, Kurt Busch.  The driver, formally known as “The Outlaw”, rallied in the late stages of the race to finish in 9th place rewarding Chiefy with 38 points.

With just two races left in the season it is quite surprising that there are so many areas within the scoring pylon that are extremely close.  Therein lies the reason that 16 out of 21 players slid around on the leaderboard this week.

The bigest movers this week is al all female duo of Lonna The Quilt Angel and Carole ,aka Rudy, who moved six (6) places this week.  The Quilt Angel rocketed up the totem pole six places to rest in 6th place.  Unfortunately, Rudy plummeted down six spots to sit in 10th place.

Moving three (3) places, after the checkered flag fell at Texas, was Jerry The Buschwacker and Linda The Cookie Mom.  The Buschwacker had a good afternoon, moving up three spots to reside now in 17th spot.  The Cooklie Mom, on the other hand, did not fair so well, falling three spots to land securely in “The Outhouse”, in 21st place!

The remaining players, Snoopy Dawn, Carlton The Doorman, Zee, aka Sissy, Kathy The Church Forecloser, Dan The Numbers Cruncher, as well as Bernie The Bay Area Bandit all moved one place.  Both The Church Forecloser and The Bay Area Bandit stepped up one spot to sit in 15th and 20th, respectively.  Conversely, Snoopy, The Doorman, Sissy, and The Numbers Dude all slid down one place to sit in 4th, 13th, and 18th, respectively.

This week we have a tie between Carole, aka Rudy and Linda The Cookie Mom for the prestigious “Crappiest Pick of The Week” award.  Both ladies proudly wear their microscopic 1 point this week with pride and jubilation!

Additionally, the one point that The Cookie Mom earned this week allowed her to issue an eviction notice Bernie The Bay Area Bandit, and take sole control of “The Outhouse”!

Next week NASCAR makes a trip out the The Valley of The Sun, Phoenix.  (Once again yours truly has media credentials for that weekend!)  There is only one spot left open for the championship four.  That means that there are five drivers desperately trying to secure that last spot, when the green flag waves next Sunday at Phoenix.  If there ever was a time that those five drivers feel like yelling “May Day”, now is the time!