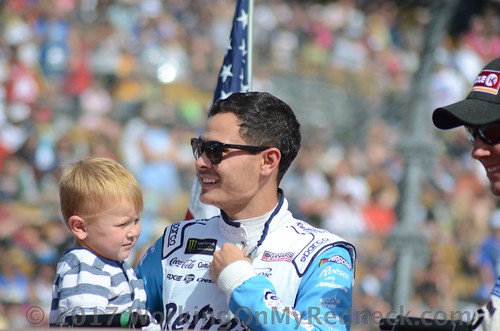 This week the long grueling 36 week MENCS season comes to an end and the 2017 champion will be crowned at Homestead.  Additionally, the 21 “Rednecks” of this fantasy league will get about a 93 day reprieve before we gather again for more fun in 2018 with the running of the Daytona 500!  At this time of year Your Most Humble Sheriff gets a little sad to realized that the season is over and that I am another year older.  Nevertheless, we can not slow the clock for the race season, just like we cannot slow the aging clock!

So for the final time this season we will take a look at our Championship weekend choices.

It is quite interesting that one quarter of the fantasy league, five players in total, are “pushing it all in” for “Young Money” this week.  Those five players riding shotgun with Kyle Larson this week includes Doug The Gandy Candy Man, Jerry The Buschwacker, Cole The Redneck Understudy, Lonna The Quilt Angel, and Your Most Humble Sheriff.  Were these five players hoping, when they were laying the segment out in their minds, that they were picking Larson to win at Homestead and also picking him for the championship?  Interesting thought, wouldn’t you say?  Unfortunately the Chip Ganassi Racing team’s wheels have come off of the car over the last month!

Other than the aforementioned group supporting “Young Money”, we have a very widely scattered area of support from the remaining players.  There are six drivers with a support group of two players on their side this week.

Starting off the list is Dan The Numbers Cruncher and Karen The Highly Opinionated Southern Belle who are hoping to be up on the pit box of the driver formally known as “The Outlaw”, now recognized by his given name, Kurt Busch.

Meanwhile, Kathy The Church Forecloser and Jeremy The Coach will be encouraging the younger brother, “The Shrub” this week.  Both are hoping that Kyle Busch can grab his second MENCS championship and bring the trophy home to Joe Gibbs Racing.

The duo of A&M Aggie Sue and David The Mudslinging Throttle Jockey are hoping that Kasey Kahne will use his last race with Hendrick Motorsports to capitalize on being a spoiler to win with that organization.

Both Bobby Blue Crush and Snoopy Dawn are banding together this week to go way out on the a limb to support Jamie McMurray for the win at Homestead.

It appears that Carole, aka Rudy, and Bernie The Bay Area Bandit must be drinking the same kool-aid.  Both ladies are fully behind “Rocket Man”, also known as “No Neck (Ryan) Newman”, this week at Homestead.

And finally both Skid-Marc and Linda The Cookie Mom are hoping that Martin Truex, Jr. can end the season with a very large exclamation point to  a miraculous 2017 season.

Through he miracles of basic math, and my basic knowledge of logic, that leaves nine players who are in bidnez for themselves this week!

Good luck to all this week at Homestead!