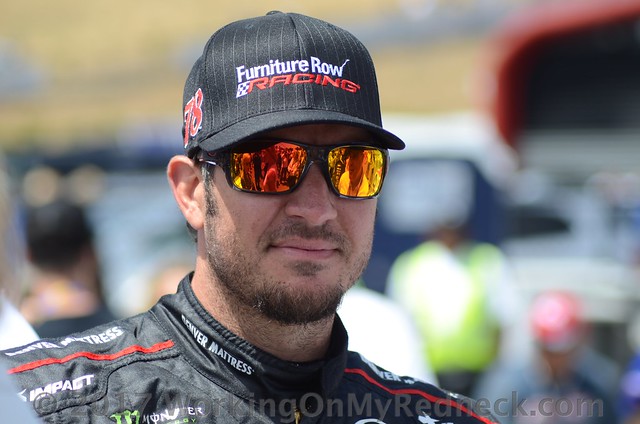 At the end of a riveting, breathtaking battle that had fans in the grandstands on their feet long after the checkered flag, Martin Truex Jr. held off Kyle Busch by .681 seconds at Homestead-Miami Speedway to win Sunday’s Ford Eco-Boost 400 and his first Monster Energy NASCAR Cup Series title.

In Dale Earnhardt Jr.’s last race in the No. 88 Hendrick Motorsports Chevrolet, Truex—one of Earnhardt’s closest friends—kept Busch behind him during a 34-lap green-flag run to the finish.

“It’s just overwhelming,” a tearful Truex said in Victory Lane. “To think about all the rough days and bad days, the days that we couldn’t run 20th, to be here—I never thought this day would come, and to be here is so unbelievable.”

The victory was a timely gift for Furniture Row Racing owner Barney Visser, who is back home in Denver, Colo., recovering from a heart attack and subsequent bypass surgery. It was also a gift to Truex’s long-time girlfriend Sherry Pollex, who has been battling ovarian cancer.

Both Skid-Marc and Linda The Cookie Mom were riding high today with the hottest driver all season, the race winner and 2017 MENCS champion Martin Truex, Jr!  For all their chewed fingernails and anxiety they added 40 points to their 3rd segment totals, the second highest score for the weekend.

This was one of those weeks where the race winner did not produce the highest scores for the players.  This week Kyle Larson, who won both stages and finished the race in third place, produced the highest score, 54 points, for his rooters.  Those players supporting “Young Money” at Homestead include Doug The Gandy Candy Man, Jerry The Buschwacker, Cole The Redneck Understudy, Lonna The Quilt Angel, as well as Leon Your Most Humble Sheriff.

Meanwhile, Carlton The Doorman was really hoping that Chase Elliott could rack up his first MENCS win before this season came to end.  But it was not to be.  Nevertheless, Elliott provided The Doorman with 39 points to end this segment.

Both Jeremy The Coach and Kathy The Church Forecloser “put it all in” with Kyle Busch, and for a while, it looked like KyBu was going to add another championship to his resume.  But alas, Rowdy had to settle for 2nd place and contributed 35 points to these two today.

Quite to my surprise 18 of the 21 players moved around on the leaderboard this final week.  The biggest mover is A&M Aggie Sue, who slithered down the totem pole five (5) spots to end the segment in 13th place.

This mismatched quintet, Jeremy The Coach, Edie The Las Vegas Super Star, Jerry The Buschwacker, David The Mudslinging Throttle Jockey, as well as Jim, aka Chiefy all moved three (3) places.  The Coach, The Las Vegas Super Star and The Buschwacker all climbed up three spots to end the segment in 8th, 9th and 16th, respectively.  Whereas The Mudslinging Throttle Jockey and Chiefy stumbled and fell down three places to sit in 17th and 20th, respectively.

Rounding out the movers this final race of the year is a group of eight players.  Those eight players are Cole The Redneck Understudy, Carlton The Doorman, Snoopy Dawn, Karen The Highly Opinionated Southern Belle, Kathy The Church Forecloser, Zee, aka Sissy, Skid-Marc and Dan The Numbers Cruncher all moved just one spot.  The Redneck Understudy, The Doorman, The Church Forecloser, ol Skidz, and Sissy al moved up one position to finish out in 3rd, 6th, 14th and 15th, respectively.  Whereas Snoopy, The Highly Opinionated One and The Numbers Dude slid one spot to sit in 10th, 11th and 19th, respectively.

This week we have two players who will be sharing the last “Crappiest Pick Of The Week” award for 2017.  Both A&M Aggie Sue and David The Mudslinging Throttle Jockey close out the year with just a single digit, 4 points, for their score at Homestead!

And I am happy to report that Bernie The Bay Area Bandit secured her position in “The Outhouse” for the entire offseason!

Happy Thanksgiving and Merry Christmas to all!