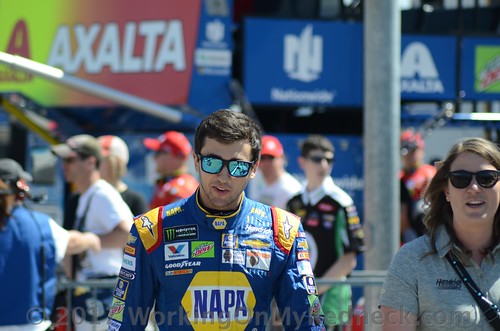 Now that the NASCAR haulers have pulled out of Daytona International Speedway, returned to their shops in the Charlotte area, reloaded for their trip back down to Hampton, GA, the real NASCAR racing season will now begin!  This is not an indictment against restrictor plate racing, no contrare, my friend.  Daytona and Talladega are great spectator races, in my most humble opinion, and animals all unto themselves in NASCAR!

This week the haulers unload their wares at the Atlanta Motor Speedway, which is about 20 miles Southeast of Atlanta on the West side of Highway 19/41 in Hampton,GA.  This wide and lightning fast 1 1/2 mile high banked speedway has some of the best racing on the NASCAR schedule!  Now that the first plate race is over we can settle into some really good racing over the next month as NASCAR goes through Atlanta and heads out to Vegas, Phoenix, and Fontana during the month of March.

This week we have a lot of choices expressed.  There are seven drivers that have more than one player backing them.

Leading the pack is the hometown boy, “Awesome Bill Jr. from Dawsonville”.  Technically his name is William Clyde Elliott, Jr., but the whole NASCAR world calls him Chase.   Well, Chase is this week’s favorite driver!  There are four players, Snoopy Dawn, Linda B. The Cookie Mom, Carole, aka Rudy, and Jerry The Buschwacker who will be rooting very loudly for ol Chase!  Could this be the week that Chase grabs his first points-paying MENCS victory?

There are two drivers that have three players in their corner for Atlanta.

First up is “Freaky Fast” Kevin Harvick.  Supporting Harvick this week is a mixed bag of players, Carlton The Doorman, Skid-Marc, and Karen The Highly Opinionated Southern Belle.  This trio is hoping to jump-start their Daytona results with a hefty addition to their tallies at Atlanta.

In addition to the above-mentioned trio rooting for their fav at Atlanta, we have another trio, Doug The Gandy Candy Man, Bobby Blue Crush, as well as Leon Your Most Humble Sheriff, backing their favorite driver this week, “Blazingly Bad” Brad Keselowski.

We have four different drivers that have amassed a small cheering section of two players each.

Both Edie The Las Vegas Super Star and Jeremy The Coach think that “The Delivernator”, Denny Hamlin, will be successful at hoisting the hardware when the checkered flag falls at Atlanta.

Jim, aka Chiefy and Bernie The Bay Area Bandit have a totally different idea.  Both believe that young gun Erik Jones will grab his first MENCS victory this week in Atlanta.

Similarly, Lonna The Quilt Angel and Don The Engine Builder are joining forces hoping that “Young Money”, aka Kyle Larson can resurrect his 2017 season and rack up a win at Atlanta.

Lastly, A&M Aggie Sue and Dan The Numbers Cruncher think that the 2017 MENCS champ, Martin Truex, Jr. will be just as dominant on the 1 1/2 tracks as he was last year!

After adding up the above players, which totals 18, that would leave four players who are independent thinkers.  Quite honestly these four players are really in bidnez for themselves!

Good luck to all this week!  Here’s to hoping that your driver produces big for you when the lights go out in Georgia.