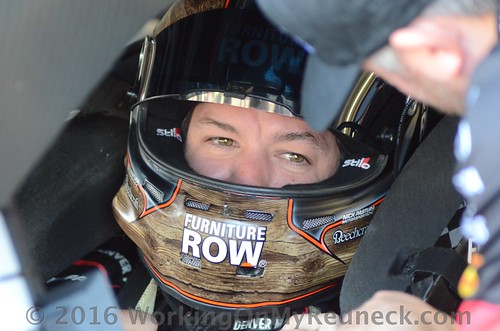 As the team haulers prepare to unload their bounty this week in Vegas it will be the beginning of the a three week West Coast swing for NASCAR.  Unlike the usual or normal weather that occurs during the Las Vegas race weekend, this week the forecast temperatures will be quite cool at the Las Vegas Motor Speedway.  But do not let that sway you, the racing at Sin City will be white hot.

Nearly one-quarter of the fantasy league, five players, have obviously reviewed some of the LVMS history.  This cast of characters includes Lonna The Quilt Angel, Bobby Blue Crush, Doug The Gandy Candy Man, Snoopy Dawn, as well as  Leon Your Most Humble Sheriff.  All of these players are all supporting and hoping that Martin Truex, Jr. can go back-to-back with victories at this facility.

However, there are four players, Edie The Las Vegas Super Star, Carole, aka Rudy, Jeremy The Coach, and Karen The Highly Opinionated Southern Belle, who disagree and are hoping that one of the homegrown Las Vegas racers, known by many names, “The Shrub”, “Rowdy”, or by his given name of Kyle Busch, can hoist the hardware Sunday evening.

Meanwhile there are three players, Carlton The Doorman, Snoopy Dawn, and Linda R The Lemonade Lefty who think that the elder Busch brother, formally known as “The Outlaw”, who has trying desperately to clean up his reputation lately and is now recognized by his given name of Kurt, will be able to put his Stewart-Haas Racing Ford Fusion into Victory Lane at his home race track.

This week “Young Money”, Kyle Larson, has a cadre of three players in his rooting section at Las Vegas.  Those three players consist of Zee, aka Sissy, Jerry The Buschwacker, as well as David The Mudslinging Throttle Jockey and each player is hoping that Larson will emerge from his early season bad luck that has befuddled him.

Lastly, we have Jim, aka Chiefy, and Ol Skid-Marc who are really hoping that Mr. Seven-Time, Jimmie Johnson, can mount a move, win the race, and rebound from his lackluster 2017 season.

For all the math majors in the fantasy league, if you have done the math so far, that leaves five players who are exercising their prerogative to be independent thinkers, and to be in bidnez for themselves this week!

Good luck to all this week in Las Vegas!  And as a reminder, everything that happens in Vegas stays in Vegas!