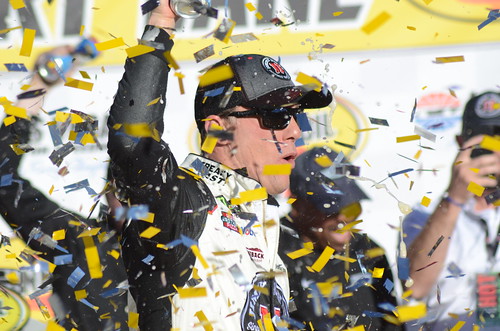 Kevin Harvick was every bit as dominant on the newer asphalt at Las Vegas Motor Speedway, racking up impressive numbers in winning Sunday’s Pennzoil 400, the third event of the season.

In winning his second straight race and his second at the 1.5-mile track, Harvick finished 2.906 seconds ahead of runner-up and Las Vegas native Kyle Busch. Third-place finisher Kyle Larson was more than 13 seconds back. Paul Menard in ninth-place was the last driver on the lead lap.

Harvick won for the 39th time in the Monster Energy Series and the 100th time over all three of NASCAR’s national touring series combined. He is tied with Tim Flock and Matt Kenseth for 19th on the all-time Cup victory list and third among active drivers.

The driver of the No. 4 Stewart-Haas Racing Ford also took the series lead by three points over second-place Joey Logano and four over third-place Ryan Blaney, who started from the pole on Sunday and led one lap—the first.

What “Freaky Fast” Harvick did to the other 39 drivers was quite embarassing!  Happy but an old fashioned “blue collar butt whopping” on those boys!

Bernie The Bay Area Bandit was the only player that had it right at Las Vegas.  The Bandito was all in with  “Freaky Fast” Kevin Harvick and let it all ride receiving a very much needed 60 points!

The second highest group of scorers this week is a trio of players that consist of Zee, aka Sissy, Jerry The Buschwacker, as well as David The Mudslinging Throttle Jockey.  All three players were playing copilot for “Young Money”, Kyle Larson, as he rocketed around LVMS Sunday.  Their bravery was rewarded with a cool 50 points.

Meanwhile, there were five players, Don The Engine Builder, Doug The Gandy Candy Man, Bobby Blue Crush, Lonna The Quilt Angel, and Leon Your Most Humble Sheriff who were really hoping that Martin Truex, Jr. would go back-to-back with Las Vegas victories.  However, that just wasn’t going to happen at Vegas, given how strong Harivck’s Ford was running all day long.  Notwithstanding the “Freaky Fast” Ford of Harvick, these five players had a very good outcome with 46 points.

Another large group of five players, Karen The Highly Opinionated Southern Belle, Edie The Las Vegas Super Star, Carole, aka Rudy, Jeremy The Coach and A&M Aggie Sue all racked up 43 points.  Four of the five players were solidly behind “ol Rowdy” Kyle Busch on Sunday.  However, A&M Aggie Sue received her points from Joey Logano at Vegas.

Lastly, Jim, aka Chiefy and ol Skid-Marc each racked up 25 points from Mr. Seven-Time, Jimmie Johnson.

As I drove back to Yuma from being at the track in Las Vegas, and reviewing the race in my head, I just couldn’t help but think about one of my favorite Tom Petty songs.  I am sure that quite a few of the Cup drivers Sunday may have also had this tune running through their heads as they tried, without any success, to catch that “Freaky Fast” Ford of Harvick!

Next week the NASCAR circus rolls about 300 miles to the Southeast to Avondale, AZ and the newly named ISM Speedway, formally known as Phoenix International Speedway.

TILL NEXT TIME, PULL YOU GLOVES UP, FLIP YOUR VISOR DOWN, AND LET’S GO RACIN’!