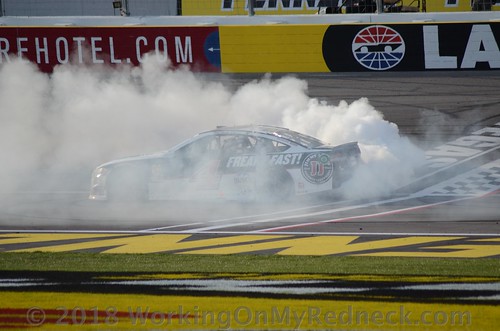 This the race team haulers have a very short work week.  Most of the haulers stayed in the Las Vegas area until Wednesday before the hop, skip and a jump over the ISM Speedway for this week’s race.  The distance between the two racetracks is all of about 300 miles from Las Vegas, NV to Avondale, AZ, a western suburb of Phoenix.

Slightly more than one quarter, 6 players in all, are jumping on “The Freaky Fast” bandwagon of Kevin Harvick this week!  Those six players are made up of David The Mudslinging Throttle Jockey, Jerry The Buschwacker, Snoopy Dawn, Jim, aka Chiefy, Edie The Las Vegas Super Star, as well as Leon Your Most Humble Sheriff, and are really hoping, that with the performances of the last two races, Harvick can again drive his Ford Fusion into Victory Lane!

Meanwhile, a quartet of players is banding together to support Kurt Busch, formally known as “The Outlaw”.  Those four players include Kathy The Church Forecloser, Lonna The Quilt Angel, Carole, aka Rudy, as well as Ol Skid-Marc.

Almost as many players are backing the younger Busch brother this week.  Don The Engine Builder, A&M Aggie Sue, as well as Dan The Numbers Cruncher have loaded up all their marbles and dropped them into the marble bag of ol Rowdy, aka Kyle Busch.

There are three drivers, this week, that have a rooting section fo two players each.

Alphabetically, the first driver out of the chute this week is Ryan Blaney.  Blaney will have Linda R., The Lemonade Lefty as well as Bernie The Bay Area Bandit hoping to join the Victory Lane celebration at ISM Speedway Sunday.

Bobby Blue Crush and Doug The Gandy Candy Man have pushed all their chips in hoping that Chase Elliott will drive his Napa Chevy into Victory Lane, hoist the trophy and sound the siren at the Dawsonville Pool Room!

Finally, Karen The Highly Opinionated Southern Bell and Carlton The Doorman are really hoping that Joey Logano can get back on track after his “encumbered win” last year at Richmond.

Good luck to all this week.

Hopefully, you will get lucky this week!