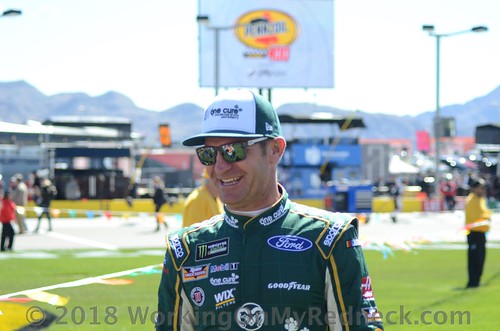 Clint Bowyer snapped a 190-race losing streak Monday, riding a second-half surge to victory in the STP 500 at Martinsville Speedway.

Bowyer led a race-high 215 of 500 laps in the Stewart-Haas Racing No. 14 Ford, holding a 1.146-second edge at the checkered flag. His first win for SHR was his first on the .526-mile track and the ninth of his Monster Energy NASCAR Cup Series career.

“Finally to get the 14 in Victory Lane is just a weight off the shoulders,” Bowyer said. “It’s been a long time. You start to question if you can get it done or not. To have it come at this place meant a lot.”

This week none of our players had selected Clint Bowyer, a driver who had not a race in 5 1/2 years,  He had lost 190 races in a row.  However, that will not stop the inevitable.  As people close the Bowyer, and know him very well, have stated many times Clint Bowyer has NEVER EVER lost a party!  There is no doubt that, with next week off for Easter, there is going to be one heck of a party back at Clint’s place!

The largest scorers this week includes an unlikely quartet of Carlton The Doorman, Bobby Blue Crush, Doug The Mongoose (his racing moniker), as well as David The Mudslinging Throttle Jockey.  All four players were rewarded with a very much needed 50 points from still another second-place finish from Kyle Busch!

Meanwhile, there is another quartet that banded together to support “Freaky Fast” Kevin Harvick at Martinsville,  That quartet is comprised of Carole, aka Rudy, Ol Skid-Marc, A&M Aggie Sue, and Dan The Numbers Cruncher.  Harvick’s 5th place finish put 42 points into the scoring buckets of each of those four players.

Also doing very well is a trio consisting of Jim, aka Chiefy, Snoopy Dawn, and Linda R. The Leomande Lefty.  All three of these players were riding with Denny Hamlin and racked up a score of 41 points.

Rounding out the list of top five scorers is Jerry The Buschwacker, who was all in supporting “Sliced Bread”, Joey Logano.  The Buschwacker added 35 much-needed points to his 1st segment tally.

Now that we are half-way through the first segment one would think that this week there would have been another large shake-up in the standings.  However, after a close examination of the stats for this week, the scoring pylon did not display much volatility!

The single biggest mover of the week is Carlton The Doorman.  The Doorman rocketed up the leaderboard four (4) places to sit in 14th position this week.

Rounding out the top movers, there are seven players, Leon Your Most Humble Sheriff, Edie The Las Vegas Super Star, Ol Skid-Marc, Bernie The Bay Area Bandit, Dan The Numbers Dude, Jim, aka Chiefy, as well as Zee, aka Sissy, who only moved up or down just one place when the checkered flag flew at Martinsville.

This week “The Crappiest Pick of The Week” award winner really did not have a bad race.  On any other week Lonna The Quilt Angel’s 18 points would have been a mid-range score.  However, that was not the case at Martinsville this week.

Even though Linda R. The Lemonade Lefty scored a very nice 41 points, it is still not enough for her to get evicted from “The Outhouse” this week!

Since next weekend is Easter, the Cup boys get next week off!