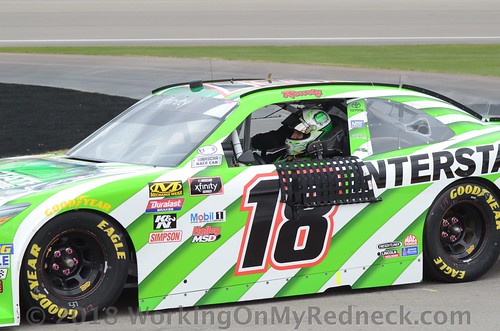 Harried by Harvick for 23 laps after a restart on Lap 312 of 334, Busch powered his No. 18 Joe Gibbs Racing Toyota across the finish line .300 seconds ahead of the driver of the No. 4 Stewart-Haas Racing Ford. The key to Busch’s victory was a mistake-free run over the final laps.

“(Harvick was) probably just a tick faster overall, but I just had to make sure to do everything I could to hit all my marks and everything to focus on making sure that I did the right things to block his air a little bit,” Busch said.

Harvick acknowledged that Busch did a good job of protecting the bottom lane and avoiding errors over the closing laps.

This week nobody had Ol Rowdy, The Shrub, aka Kyle Busch, as their choice to win the O’Reilly Auto Parts 500.  Therefore, this weekly award will be put back on the shelf till the checkered flag flies next week at “The Last Colosseum”, Bristol Motor Speedway.

This week’s scores are quite amusing.  Ten out of the twenty-two players were only able to add a single digit to their totals this week, resulting in large-scale movement this week!

This week Jim, aka Chiefy, hit the jackpot, was our highest scorer and banked a very cool 47 points for Kurt Busch’s 7th place finish.

Both Zee, aka Sissy and Don The Engine Builder were stowaways into the copilot’s seat of Kevin Harvick’s Busch Light Ford for the 500 miles at Texas.  In return for their vote of confidence, Harvick awarded these two players with 45 points!

Jeremy The Coach rallied this week garnering 27 points.  This was a good week to choose the “Young Gun from HMS”, William Byron.  Byron pulled off his first top ten finish of his rookie season, and The Coach timed it perfectly.

Lemonade Lefty, aka Linda R., rounded out the top five scorers this week.  Lemonade Lefty went deep into the wishing well and selected Trevor Bayne at Texas.  Showing gratitude Bayne rewarded her with a 12th place finish and 25 points.

Because so many, ten players in all did so poorly, the scoring pylon looked as if someone dropped it into a blender, pushed puree and then poured out the results!  Fifteen of the twenty-two players moved up or down on the leaderboard.

The single biggest mover after the checkered flew at Texas is Jim, aka Chiefy.  Chiefy rocketed right up the totem pole seven (7) places to sit in 6th place.

Just behind Ol Chiefy in the scale of movement is Zee, aka Sissy.  Sissy, likewise, stepped up her game this week and launched up six (6) positions to reside in 12th place.

Next up for discussion is a quartet of players that includes Lonna The Quilt Angel, Jerry The Buschwacker, Ol Skid-Marc, as well as Dan The Numbers Cruncher who moved four places.  The Quilt Angel tip-toed positions to rest in 11th place.  Unfortunately, The Buschwacker, Skid-Marc, and The Numbers Dude all plummeted four spots to rest in 13th, 14th, and 16th, respectively.

There were two players who moved three (3) places this week.  The Bay Area Bandit stepped up three spots to sit in 8th place, while The Highly Opinionated One slid down three spots to land in 10th place.

Both Doug The Gandy Candy Dude and Edie The Las Vegas Super Star tripped and fell two (2) place to reside in 5th and 7th, respectively.

This week there was lots of fodder from which to decipher through to get to “The Crappiest Pick of The Week”!  I believe that this week we have the largest tie in the history of The Redneck Fantasy League.  We have not had six people do so “Crappy” in one week, and thus have to share this award with so many players!  This week Karen The Highly Opinionated Southern Bell, Snoopy Dawn, Carole, aka Rudy, Doug The Gandy Candy Man, David The Mudslinging Throttle Jockey, as well as Dan The Numbers Dude all scored a microscopic 2 points, and thus are co-winners this week!

Once again, for the six straight week, Lemonade Lefty will remain in sole control of “The Outhouse”.  However, it must be noted that The Cookie Mom is making a run on trying to evict Lemonade Lefty out of her familiar digs!

Next week, NASCAR travels Northeast of Charlotte where they will unload at “The Last Colosseum” in Bristol, TN.  Not only does Bristol Motor Speedway make Tennesse famous but there a couple of companies from that state that are famous as well, like Jim and Jack!