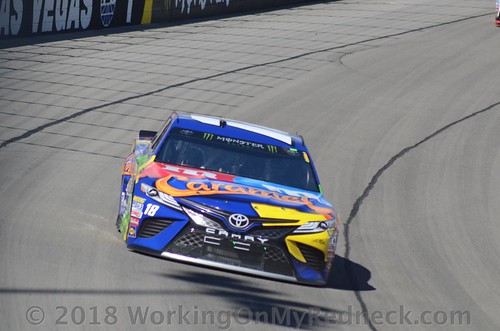 This week NASCAR travels North to “The World’s Fastest Half Mile”, “Thunder Valley”, “The Last Colosseum”, aka Bristol Motor Speedway.  For those who are unaware, the town of Bristol is evenly divided between the state of Virginia and Tennessee!  The state line runs right down the middle of Main Street!

One-fifth of the Fantasy league, four players in total, are banding together supporting “The Shrub”, aka Kyle Busch.  Those four players backing “Rowdy” at Bristol include Snoopy Dawn, Lonna The Quilt Angel, Linda B. The Cookie Mom, as well as Linda R., better known as Lemonade Lefty.  Is it just me or is there something odd about this group supporting KyBu being all female?  I’m just saying…….  Maybe The Redneck Fantasy League P.I. may have to be re-engaged and put out on assignment again this year for some sleuth work!

This week we have a long list, six drivers in all, that have a cheering section of, two players each.  Alphabetically speaking the first driver to discuss will be Ryan Blaney.  This week Edie The Las Vegas Super Star and  Jerry The Buschwacker, a mismatched pair if there ever was one, are joining forces in hopes that this third-generation race car driver can log his first Cup win for Team Penske in 2018 at Bristol.

However, Bobby Blue Crush and Doug The Gandy Candy Man are thinking very differently.  This two are thinking that “Freaky Fast” Kevin Harvick will return to his 2018 winning ways at “Thunder Valley”.

Mr. Seven-Time, Jimmie Johnson, this week has Zee, aka Sissy and Cubic Dollars Don hoping that he can punch his ticket early in the season to the Playoff Round of 16.

Meanwhile, “Young Money”, aka Kyle Larson, will have Carlton The Doorman and Karen The Highly Opinionated Southern Belle in his corner all weekend.  Both would love to receive The Fraternal Order of The Go Fast award Sunday!

It appears that both Jim, aka Chiefy, and Jeremy The Coach are backing the 2016 NXS champion, Daniel Suarez this week.

Now that we have moved into the second half of this segment, many of the players that are in the bottom half of the leaderboard are looking at their remaining picks, analyzing their possibilities, and ultimately thinking to themselves that they hope that their remaining choices will not “let them down” and thereby becoming a first segment “also-ran”!