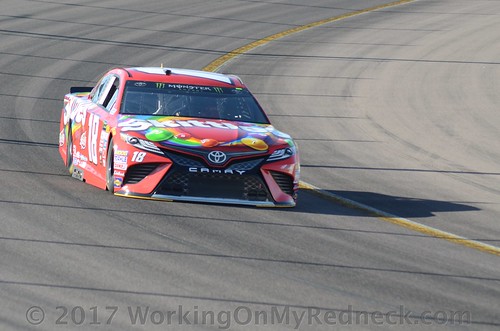 Everyone knows Kyle Busch as “Rowdy,” but you could also call him “The Postman,” given that neither rain, snow, sleet nor hail could keep him from completing his appointed rounds at Bristol Motor Speedway.

Executing a textbook bump-and-run against runner-up Kyle Larson on Lap 495 of 500, Kyle Busch pulled away to win Monday’s weather-delayed Food City 500, claiming his second straight victory of 2018 and his seventh win at Thunder Valley, most among active drivers.

In a race delayed by rain after 204 laps on Sunday—then prefaced by sleet on Monday—Busch, the pole winner, claimed the 45th Monster Energy NASCAR Cup Series victory of his career, breaking a tie with NASCAR Hall of Famer Bill Elliott for 16th on the all-time win list.

Larson, who led a race-high 200 laps, held the top spot after a restart on Lap 479, following the 13th caution of the race for Brad Keselowski’s contact with the outside wall off Turn 2. Busch charged past eventual fourth-place finisher Ricky Stenhouse Jr. on Lap 485 and took off in pursuit of Larson.

As the drivers worked traffic, Busch got to Larson’s bumper and nudged the No. 42 Chevrolet in Turns 1 and 2. The coup de grace came in Turns 3 and 4, where Busch’s No. 18 Toyota pushed Larson’s Chevy up the track, with Busch diving underneath for the lead.

The final caution was a godsend for Busch, who thought he had a tire going flat and was preparing to pit.

“We weren’t quite as good as the 42 (Larson) on that long run before that last caution came out,” said Busch, who led 117 laps in the two-day affair. “I actually thought I had a tire going down, but we were able to get some tires on it and go give it everything we had.

“We had a 20-lap shootout, and that was everything it was about right there, just chasing down that 42 and being able to get there.”

The final pit stop proved critical because Busch had the superior car after the final restart.

This week we have four players who get to share this prestigious award.  Those four players include Snoopy Dawn, Lonna The Quilt Angel, and both of the  Lindas, ie, The Cookie Mom and Lemonade Lefty.  Each of these ladies racked up a very the weekly high score, a very cool 49 points!

This week we had two players who deposited a very much needed 47 points from “Young Money”, Kyle Larson’s, second place finish.  Karen The Highly Opinionated Southern Belle, as well as Carlton The Doorman had a vice tally added to their 1st segment totals at Bristol.  Additionally, it has been reported, and I have reason to believe that this tidbit of info to be factual, The Doorman just turned 81 years old this week!

Meanwhile, we have an undercover trio, Bernie The Bay Area Bandit, Zee, aka Sissy, and Don The Engine Builder, all were on the Mr. Seven-Time, Jimmie Johnson, bandwagon at Bristol.  Each of these players was rewarded with 46 points from Johnson’s third-place finish.

Ol Skid-Marc had a very good race at Bristol as well.  He was able to rack up 37 points from Clint Bowyer’s eighth-place finish.

Rounding out the top five scorers this week is Leon Your Most Humble Sheriff.  The Former Air Force Jet Jockey brazenly went out on a limb with Dale Jr’s replacement driver, Alex Bowman at Bristol.  Bowman The Showman had his best Cup finish since buckling into the HMS 88 Nationwide Chevy slipping Your Most Humble Sheriff 36 points.

This week twenty one out of twenty-two players changed positions on the weekly leaderboard!  I will address the lone player who has burrowed into her comfortable place later in this post.

The biggest movers this week is an unlikely female duo of Edie The Las Vegas Super Star and A&M Aggie Sue.  Both of these ladies plummeted six (6) positions after the checkered flag at Bristol, residing in  13th and 15 positions, respectively.

We have a quintet of players who have moved two (2) positions after Bristol.  Those five players include Karen The Highly Opinionated Southern Belle, Zee, aka Sissy, Ol Skid-Marc, Dan The Numbers Cruncher, Snoopy Dawn, as well as Carol, aka Rudy.  The Highly Opinionate One, Sissy, Skid-Marc, The Numbers Dude, and Snoopy Dawn, all stepped up two places to position themselves in 8th, 10th, 12th, and 14th spots, respectively.

Wrapping up the top five movers this week is a large gaggle of players, eight in total, who moved one place.  Those players that were fortunate enough to move up one place include our new leader, Cubic Dollars Don, Leon Your Most Humble Sheriff, Jeremy The Coach, and who now resides in 1st, 3rd, 16th, and 20th, respectively.  Conversely, Kilimanjaro Bobby, David The Mudslinging Throttle Jockey, Doug The Mongoose, and Kathy The Church Forecloser are holding down 2nd, 4th, 6th, 19th, respectively.

Once again we have two players who will be sharing “The Crappiest Pick of The Week” award.  Both Edie The Las Vegas Super Star and Jerry The Buschwacker were only able to muster up 2 points this week, thereby staking their claim to this prestigious weekly award!

Once again Linda R, Lemonade Lefty is still hold down the fort in “The Outhouse”.  However, this week Rudy made a valiant effort to try to evict the Lemonade Lefty, but failed.

This week NASCAR will leave Tennessee and invade another short track, Richmond Raceway.

TILL NEXT TIME, PULL YOUR GLOVES UP, FLIP YOUR VISOR DOWN, AND LET’S GO RACIN’!