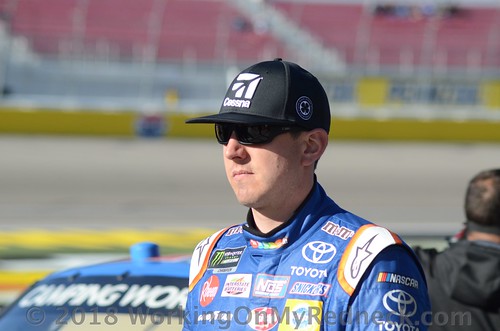 Kyle Busch motored away on the final restart to win his third straight Monster Energy NASCAR Cup Series race of the season, winning in dramatic fashion in a green-white-checkered finish at Richmond Raceway in Saturday’s Toyota Owners 400.

Busch grabbed the 46th win of his Monster Energy Series career, building upon victories at Texas and Bristol. Busch had to come from back in the field, 32nd place, to win, besting Chase Elliott by 0.511 seconds after the final restart. For Elliott, it was his eighth second-place finish.

Nobody was onboard with “The Shrub” this week at Richmond, therefore, this weekly award will go back into the vault til next Sunday at Talladega Superspeedway.

This week Kilimanjaro Bobby resumes the role as the leader of The Redneck Fantasy League!

The biggest scorers this week is a quintet of players. Those five players include Kathy The Church Forecloser, Linda B. The Cookie Mom, Bobby Blue Crush, Bernie The Bay Area Bandit, as well as Doug The Gandy Candy Man. All five players racked up 53 points from the 4th place finish of Joey Logano.

Additionally, Linda R, The Lemonade Lefty and Carole, aka Rudy, had a fantastic race at Richmond adding 43 points to their 1st segment totals from the 9th place finish of Clint Bowyer.

Meanwhile, Karen The Highly Opinionated Southern Belle secured a nifty 41 points via The Outlaw, aka Kurt Busch, finishing in 11th place in the Toyota Owners 400.

Rounding out the top five scorers this week is a quartet of mismatched players. This group consists of Dan The Numbers Cruncher, Lonna The Quilt Angel, Carlton The Doorman, as well as Leon Your Most humble Sheriff. They all added a cool 34 points to their totals from the 3rd place finish of Denny Hamlin.

The single biggest mover of the week is Don The Engine Builder. Ol Cubic Dollars Don went from flying high and being our weekly leader to stumbling and falling four (4) spots to now sit in 5th place.

Five players, Bernie The Bay Area Bandit, Doug The Mongoose, David The Mudslinging Throttle Jockey, Zee, aka Sissy, and Snoopy Dawn, all moved two (2) positions this week. Both The Bay Area Bandit and The Mongoose, climbed up in the standings sitting in 3rd and 4th, respectively. Unfortunately, The Mudslinger, Sissy, and Snoopy all dropped two positions to reside in 6th, 12th, and 20th, respectively.

This week only one player could muster up just a single digit score. This week “The Crappiest Pick of The Week” award goes to the person who racked up a microscopic 8 points, Zee, aka Sissy.

Stop me if you may heard or read this recently! This week “The Outhouse” award goes to (drum roll please) Linda R. The Lemonade Lefty! Once again she is in sole control!

Next week NASCAR heads down to the deep South, Sweet Home Alabama!