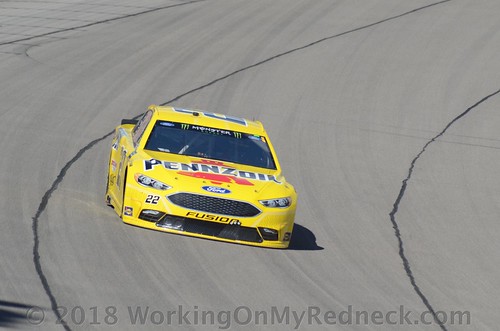 Joey Logano avoided a late, 14-car wreck and held off Kurt Busch on the final lap to win the GEICO 500 on Sunday at Talladega Superspeedway. Nearly a year since his last win at Richmond, Logano had just enough in the Team Penske Ford No. 22 to claim his 19th victory in the Monster Energy NASCAR Cup Series.

Logano led 70 laps of the 188-lap race en route to his third career victory on the high banks in Alabama. Busch came in second, followed by Chase Elliott, Kevin Harvick, and Ricky Stenhouse Jr. Fords made up six of the top seven finishers, but Logano’s teammate Brad Keselowski wasn’t one of them.

That’s because the “Big One” erupted on Lap 165 when Jimmie Johnson got loose in front of Hendrick Motorsports teammate William Byron. The wreck included the five-time Talladega winner Keselowski, who was knocked out of the race, along with Clint Bowyer, Paul Menard, and others.

Two of our players were fortunate enough to be riding shotgun with the GEICO 500 winner this week, Joey Logano.  Both Snoopy Dawn and Carole, aka Rudy, racked up an almost perfect score today, logging the highest scores for the race.  These ladies received a score of 58 points out of a possible 60 for any race!

Also fairing well this week is Doug The Gandy Candy Man.   After the checkered flag flew at Talladega, The Mongoose was able to squeeze out 41 points from Ricky Stenhouse, Jr’s 5th place finish in the GEICO 500.

Additionally, there is a huge group, a group of seven players in total, that added 38 points to their first segment totals.  Those seven players include Dan The Numbers Cruncher, Zee, aka Sissy, Bernie The Bay Area Bandit, Bobby Blue Crush, Linda B. The Cookie Mom, Edie The Las Vegas Super Star, as well as Leon Your Most Humble Sheriff.  All seven players had pushed in all of their chips in total support for The Outlaw, aka Kurt Busch.

Meanwhile, Carlton The Doorman was the only player to pick William Clyde Elliott, Jr., better known as Chase this week.  The Doorman gathered 34 points from Elliott’s third-place finish.

This week there were only three players that remained in their previous places as the Sunset cast itself over the Talladega Superspeedway, Bobby Blue Crush, A&M Aggie Sue, and our resident “Princess of The Poophouse”, Linda R. The Lemonade Lefty!

The three players who moved the most on the leaderboard this week is Snoopy Dawn, Ol Skid-Marc and Jeremy The Coach.  Snoopy had a very good week because she climbed up the totem pole five places to sit now in 15th place.  Conversely, Skid-Marc and The Coach did not fare so well and plummeted five places to rest now in 16th and 21st places, respectively.

Prior to the Talladega race Carole, aka Rudy, was knocking on the door at “The Outhouse”, however this week she propelled herself up four spots to sit now in 17th place.

Both Jerry The Buschwacker and Dan The Engine Builder slithered down the leaderboard three places to sit in 8th and 20th, respectively.

However, Doug The Gandy Candy Man and Dan The Numbers Dude kept their heads above water and stepped up two places to own 2nd and 13th place, respectively.

Rounding out the top five movers of the week is a group of players that number ten players, nearly half of this fantasy league.  Those ten players moved one position up or down when all the dust settled.

This week “The Crappiest Pick of The Week” award is handed out, and shared by two players.  Those two players, Ol Skid-Marc and Jeremy The Coach, each scored just one (1) microscopic point this week.

Lastly, “The Outhouse Award” once again is bestowed upon Linda R. The Lemonade Lefty.  I believe that she has never been observed outside of “The Outhouse” so far this segment!

For the entire duration of the GEICO 500, 188 laps, it would not be a big stretch to think that many of the drivers were thinking, man these guys are nuts!  “I have clowns to the left of me and joker to the right, here I am……stuck in the middle with you”!

Check out the results from the GEICO 500 from Talladega.