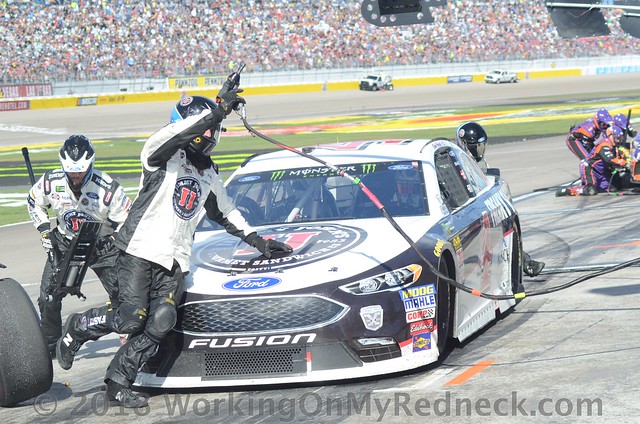 Kevin Harvick came flying out of a rain delay to soak the field at Dover International Speedway and win Sunday’s AAA 400 Drive for Autism. Harvick took the lead from Stewart-Haas Racing teammate Clint Bowyer on Lap 338 of 400 and did not look back, crossing the start-finish line 7.450 seconds ahead of the No. 14 Ford.

For Harvick, it was his 41st victory in the Monster Energy NASCAR Cup Series and his second at the 1-mile concrete oval (first since 2015). Bowyer, who had the lead before a 41-minute, 1-second rain delay, finished second. Daniel Suarez equaled his career high with a third-place finish, and Martin Truex Jr. and Kurt Busch rounded out the top five.

Fords had five of the top eight finishers, and Harvick swept the opening stages. For SHR, it placed three cars in the top five. The top Chevrolet driver was 11-time Dover winner Jimmie Johnson, who finished ninth.

Another player that had a very good race this week is Zee, aka Sissy.  Sissy was rolling with “Blazenly Bad” Brad Keselowski at “The Monster Mile”.  Bad Brad rallied to pick up a 6th place finish in the AAA 499 Drive For Autism and give Sissy 48 crucial points.

Meanwhile, Lonna The Quilt Angel is making a late segment run to try to capitalize on making some bank to start off this race season!  The Quilt Angel was riding shotgun with another Stewart-Haas Racing driver at the concrete jungle, Clint Bowyer,  Bowyer’s second-place finish allowed The Quilt Angel to deposit 45 points into her 1st segment totals.

Rounding out the top five scorers this week is a quartet of players, not karaoke singers.  This quartet includes Snoopy Dawn, Linda R. The Lemonade Lefty, Ol Skid-Marc, and David The Mudslinging Throttle Jockey.  This unlikely, and somewhat motley, group gathered up 37 points to boost their 1st segment tallies.

As one might expect this late into the segment there was only moderate movement on the scoring totem pole this week.  In fact, nine players, almost half of the group, remained in their previous positions.  Those players are Kilimanjaro Bobby, Doug The Mongoose, David The Mudslinger, Jim, aka Chiefy, Snoopy Dawn, Linda B. The Cookie Mom, Jeremy The Coach, and Linda R. The Lemonade Lefty.

Second on the movers’ list is a foursome that consists of Zee, aka Sissy, Karen The Highly Opinionated Southern Belle, Cubic Dollars Don, as well as Carole, aka Rudy.  All of these players moved three (3) spots.  Sissy was able to step up three places to sit in 8th place.  Conversely, Karen The Highly Opinionated One, Cubic Dollars, and Rudy all dropped down three places in the standings sitting now in 9th, 11th, and 20th, respectively.

Finally, Bernie The Bay Area Bandit, Leon Your Most Humble Sheriff, Lonna The Quilt Angel, Skid-Marc, as well as Jerry The Buschwacher all shifted just one position this week.  The Bay area Bandit, The Quilt Angel, and The Buschwacker all moved up one spot the rest in 3rd,6th, and 19th places, respectively.  However, Your Most Humble Sheriff and Skid-Marc slipped one position now owning the 4th and 17th place, respectively.

Once again this week we have two players that must share “The Crappiest PIck of The Week” award.  Both Carole, aka Rudy and Don The Engine Builder were rooting for Ryan Newman this week and were only rewarded 4 points for his 33rd place finish.

I know that this may sound familiar but……..  The Lemonade Lefty, try as she might to escape, and having had a very good race at Dover, she could not get evicted from “The Outhouse” this week!

With just one race left in this segment, and the totals are very close in positions 2-6, the 1st segment payout money is still up for grabs,  All that I can say about “The Money” is “Baby Hold On”!

Next week  NASCAR rolls out to the wheat fields of Kansas.