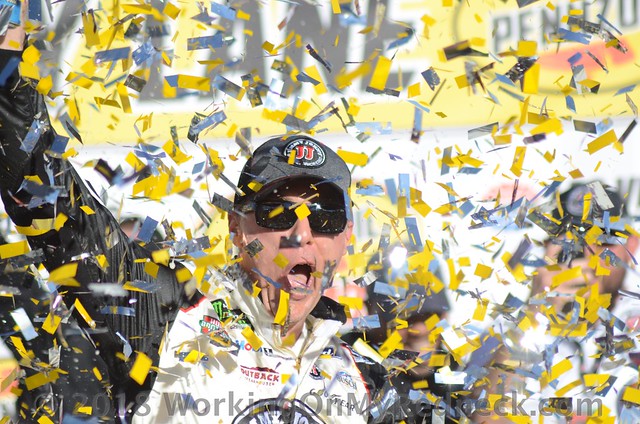 Stewart-Haas Racing’s Kevin Harvick again proved why he’s called “The Closer” and continued his early-season dominance by winning his fifth race of 2018 in Saturday night’s Monster Energy NASCAR Cup Series event at Kansas Speedway, the 12th race of the season.

Harvick, who started from the Busch Pole and finished second in both Stage 1 and Stage 2, took advantage of a late-race caution to rocket ahead of Kyle Larson on a restart with 25 laps to go. But it was far from over.

An ensuing caution after Ryan Blaney and Kyle Larson made contact battling for third place — which sent Blaney to the garage — jumbled the field yet again. Joey Logano stayed out to inherit the lead, and five others followed suit. Meanwhile, William Byron took two tires, Harvick — who took four tires, and was behind Byron on pit road — restarted eighth.

A fiery wreck brought out the red flag with fewer than 15 laps remaining, setting up a late restart in which Harvick started sixth.

But the four tires he took when other stayed out proved to be the difference as he passed Martin Truex Jr. coming to the white flag.

Nobody selected “Freaky Fast” Harvick as their man for Kansas so this award will back into the cabinet til the Coca-Cola 600 at Charlotte Memorial Weekend in two weeks.

The biggest scorer this weekend was Ol Skid-Marc.  Ol Skidz selected Joey Logano as his man for the weekend and was nicely rewarded with 47 points for “Sliced Bread’s” third-place finish at Kansas.

We had a player this week that had a major breakthrough.  Linda R. The Lemonade Lefty had a phenomenal week racking up 38 points to cap off this segment!  She is the only player to pick Aric Almirola, who finished ninth.  She picked him at the track where he fractured his vertebrae last year.

Meanwhile, both Carlton The Doorman and Snoopy Dawn had picked Eric Jones and received 32 points to top off their first segment tallies.

Rounding out the top five weekly scorers is Jeremy The Coach.  The Coach was riding shotgun with “Blazingly Bad” Brad Keselowski and picketed a cool 31 points from “Bad Brad’s” 14th place finish,

Quite uncharacteristically for the last race of the segment, we had a massive amount of movement this week.  Upon closer scrutiny of the scores, the reason for so much movement after 12 races was that there was so much competition in the middle part of the leaderboard!  In fact, after 12 races there was a tie between Linda B. The Cookie Mom and Jeremy The Coach for 20th place!

There were only five players that remained in their previous places once the checkered flag flew at Kansas, Bobby Blue Crush, Leon Your Most Humble Sheriff, David The Mudslinging Throttle Jockey, Jeremy The Coach and our “cellar dweller” for the segment, Linda R. The Lemonade Lefty!
Ol Skid-Marc was the largest mover this week.  Skidz made a kamikaze run at the leaders and climbed up the totem pole six (6) places to finish off the segment in 11th place,

There is a mixed bag of four players who moved two places this week. That mixed bag includes Jim, aka Chiefy, Dan The Numbers Cruncher, Edie The Las Vegas Super Star, and Linda B. The Cookie Mom.  Ol Chiefy finished off his segment by stepping up two places to sit in 8th place.  I can’t say that the other three players fared as well.  No, all three of those players, The Numbers Dude, The Vegas Super Star, and The Cookie mOm all lost two spots to land in 15th, 16th, and 20th, respectively.

The remaining ten (10) players all moved just one place.

There were five players that could only muster up a single digit for their Kansas score this week.  For the math majors in the fantasy league, that means that one-quarter of the fantasy league had a really crappy race day!  But this week Lonna The Quilt Angel took the honor of “The Crappiest Pick of The Week” with just 4 points.

It feels like I have announced this many times this segment.  Our newest player, Linda R. The Lemonade Lefty, is “The Outhouse Award” winner this week!  She will be receiving traveling plaque shortly so that she can put it by her TV for the next segment to remind her of her excellence during this segment!

Next week NASCAR will be “coming home” to Charlotte, but there is not a points race.  However, the Trucks will be racing at Charlotte Friday evening and the All-Star race will be on the menu for Saturday night.

PS the cool little guitar notes that repeat itself throughout this song may sound familiar to some of you country music lovers.  It is a tribute from Keith Urban to Merle Haggard, and came from Merle’s song “Momma Tried”!