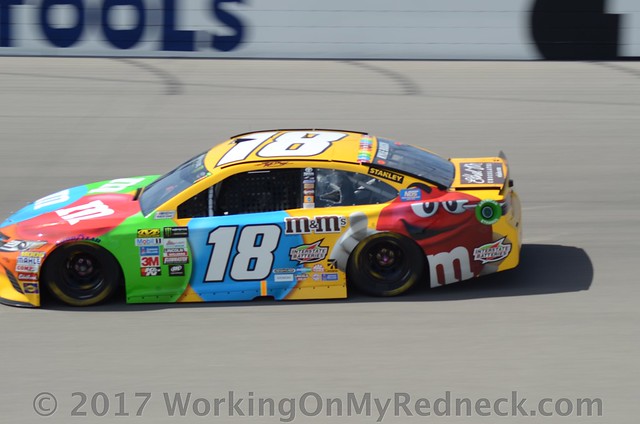 Kyle Busch made history Sunday night by capturing his first points victory at Charlotte Motor Speedway, becoming the only driver to win at every track on which he has started. Busch did it in dominating fashion in the Coca-Cola 600, leading 377 of 400 laps, sweeping every stage win and joining an elite group in NASCAR history along the way.

Busch, who started from the Busch Pole, won for the fourth time this season and the 47th time in his career.

And when he led his 122nd lap in the second stage, he even joined a group of some of NASCAR’s best who have led at least 15,000 career laps.

To start out the second segment we have three players who were riding shotgun with the Coca-Cola 600 winner, Kyle Busch, on the Memorial Weekend.  Those three players, Jerry The Buschwacker, Jim, aka Chiefy, and Dan The Numbers Cruncher, received the max points for the Charlotte race from Rowdy’s victory, 70 huge points!  These are the players who share a piece of the lead after the first race of this segment.

Most everyone started out this segment with respectable numbers when the checkered flag flew in “The Queen City”.  Most all of the NASCAR teams are housed within about 15 miles of the Charlotte track, so that means that the drivers and crewmembers were all at home this week.  As noted on my mid-week post there were eight players that were riding piggy-back with the 2017 MENCS Champ, Martin Truex, Jr. this week.  Those eight players, nearly one-third of the entire fantasy league, consists of Karen The Highly Opinionated Southern Belle, Kathy The Church Forecloser, Carlton The Doorman, Snoopy Dawn, Linda R. The Lemonade Lefty, Amber The Cheddar Dudette, Edie The Las Vegas Super Star, as well as Leon Your Most Humble Sherrif.  This group received a very nifty 54 points from the second place finish of Truex.

Next, on the scoring pylon, there was a quartet of players that racked up 41 points.  Jeremy The Coach was rooting loud and proud for his man “Blazingly Bad” Brad Keselowski, while Bobby Blue Crush, David The Mudslinging Throttle Jockey, and Doug The Gandy Candy Man were betting the farm on “Mr. Seven-Time”, Jimmie Johnson.

Kurt Busch, formally known as “The Outlaw”, brought some early segment happiness to both A&M Aggie Sue and Linda B. The Cookie Mom this week.  Both ladies logged a very cool 36 points to start off this segment.

Rounding out the top five scorers for the week is our buddy Ol Skid-Marc.  Skidz selected Clint Bowyer as his man to win the Coca-Cola 600.  For Bowyer’s 12th place finish, Skidz put 35 points up on the board!

Starting out this segment an old familiar face makes a huge run on “The Outhouse”!  Yes indeed, Bernie The Bay Area Bandit, and The Outhouse Award winner for the third segment in 201, returns to her “comfort zone”, aka The Outhouse!  Yeah, I guess that you could say that she is “coming home”!

Next week NASCAR rolls into the tricky triangle of Pocono Raceway, not too far Northwest from the old stomping grounds of Carlton The Doorman and Snoopy Dawn!

Check out the results of the Coca-Cola 600 at Charlotte Motor Speedway.