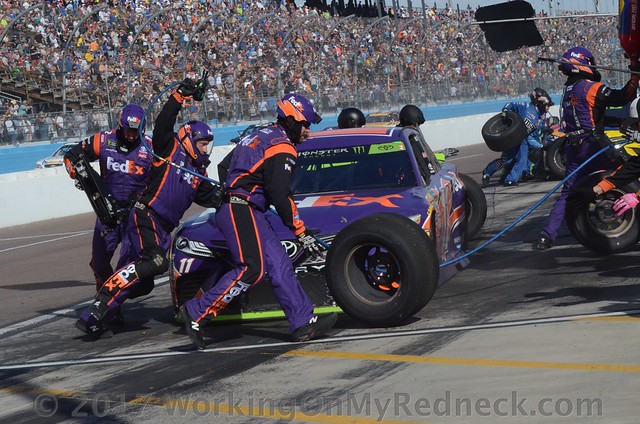 This week NASCAR rolls up into Eastern Pennsylvania to “the Tricky Triangle”, aka Pocono Raceway.  Pocono Raceway is located about equidistant between Allentown and Wilkes-Barre, just a few miles south of I-80 in the Pocono Mountains.  This race track attracts many of its fans from the metro Philly and NYC area since the track is driving distance from both cities!  (Back in 1980-1982 I flew out of NYC and lived out in Queens, in Woodhaven near Aqueduct Park, the horse track.)

As the photo that accompanies the title of this post would suggest, many in the fantasy league think that Denny Hamlin is the man this week at Pocono.  Those players who are all in for “The Delivernator” are Zee, aka Sissy, Jeremy The Coach, Skid-Marc, Edie The Las Vegas Super Star, Linda R The Lemonade Lefty, and David The Mudslinging Throttle Jockey.  All eight of these players are really hoping that Hamlin can hoist the hardware Sunday and deliver a huge score early in the segment for them.

“Blazingly Bad” Brad Keselowski has a very sizable rooting section for the Pocono race this week.  The players that are jumping onto the “Bad Brad” bandwagon this week include Carlton The Doorman, his better half ol Snoopy Dawn, as well as Bernie The Bay Area Bandit, and Dan The Numbers Cruncher.

Meanwhile, Leon Your Most Humble Sheriff and Doug The Gandy Candy Dude are rolling the bones and putting it all in for “Freaky Fast” Kevin Harvick this week.

Lastly, Jerry The Buschwacker and Lonna The Quilt Angel are teaming up and cheering on Martin Truex, Jr.!

That leaves eight players who have struck out on their own this week,  Those eight players may think that they are independent thinkers.  But oh no, they are really just in bidnez for themselves!

By the time most of you read this post I will be well on my way on the first leg of my summer RV road trip with Jim, aka Chiefy and Edie The Las Vegas Super Star guarding my “six” the whole trip!.  The first stop is Fresno, CA where I can agitate and irritate my two sons, Jason The Latent Tie Hippie and All Around Edgy Dude and Jeremy The Coach.  I am sure that my sister, Zee aka Sissy will tolerate my visit, as well.  LOL!!  But I am most interested in visiting with my two grandchildren!

While I am back in Fresno I am going to take a little trip by the house that I grew up in.  You know they say that you can’t go back home again.  Well, that was “the house that built me”!