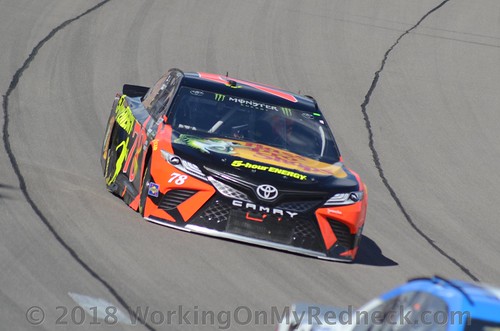 Truex led twice for 31 of the 160 laps in the Furniture Row Racing No. 78 Toyota. His second win at Pocono Raceway was the 17th of his career in NASCAR’s top division.

Truex won the race’s first stage but fell back to 14th during the intermission’s pit stop when a tire hit the jack, slowing the left-side tire change. From there, Truex stormed back into contention, taking the top spot for the final time on Lap 140 and leading the rest of the way.

This week the award goes to two of our players who had all their fantasy league marbles inside the marble sack of the race winner and the 2017 MENCS champ, Martin Truex, Jr.  Both Lonna The Quilt Angel and Jerry The Buschwacker were riding high as Truex was able to hold off the hard-charging pair of Kyles, Larson, and Busch, for the win.  Both of these players racked up a very nice 57 points for the race!

Both Doug The Gandy Candy Man and Leon Your Most Humble Sheriff ended the day smiling very broadly with 52 points added to their totals.  Both players were rooting for “Freaky Fast’ Kevin Harvick and were rewarded nicely for his fourth-place finish at Pocono.

Meanwhile, Karen The Highly Opinionated Southern Belle came out smelling like a rose this week with her choice of Kyle Busch.  “Rowdy” deposited 51 points into her Redneck Fantasy League bank account this week.

Likewise, Carole, aka Rudy, was giggling all the way to the bank this week with a score of 43 points!  Rudy was cheering on “Young Money”, Kyle Larson, and hoping that he had something left in his tank for Truex.  Unfortunately, Larson had nothing for Truex in the closing laps at Pocono.

Rounding out the top five scores this week are Kathy The Church Forecloser and Linda R. The Lemonade Lefty.  Both of these ladies racked up 38 points this week.  Their scores were the same, but they chose different drivers, The Forecloser was riding shotgun with young Ryan Blaney and The Lemonade Lefty was hanging with Chase Elliott all race.

Since there were so many players tied last week after the first race of the segment, the movement this week is not really illustrative of the actual happenings within the standings, it was almost all negative movement with the exception of Your Most Humble Sheriff!  I don’t recall this happening in this fashion before!

The single biggest movers this week consists of a quartet of players, Jeremy The Coach, David The Mudslinging Throttle Jockey, Linda B. The Cookie Mom, and Ol Skid-Marc. All four dropped like a prom dress this week, falling down the totem pole fifteen (15) places!  These four players have landed near the bottom of the scoring pylon in 18th, 19th, 20th, and 21st positions, respectively!

Rounding out the top ten movers this week is a very unlikely duo of Carlton The Doorman and Bernie The Bay Area Bandit.  Both of these players lost seven (7) places to now reside in 10th and 17th places, respectively.

This week we have the largest group of players ever who demonstrated their ineptitude in picking winners simultaneously!  We have six players who will be sharing “The Crappiest Pick of The Week” award.  Those six players include Zee, aka Sissy. Jeremy The Coach, Ol Skid-Marc, Edie The Las Vegas Super Star, Linda B. The Cookie Mom, and our resident midget racer (no he is not a “little person” that runs track!), David The Mudslinging Throttle Jockey.  These half-dozen players could only muster up a single digit ,8 points, for their efforts this week.

We have a new “Princess of The Poophouse” this week!  With a week of just scoring 8 points, Sissy has taken full and sole control of “The Outhouse”!

Check out the results of the Pocono 400.

For those of you who have plummeted to the bottom of the ol totem pole this week, you may feel like it is raining on your parade!

TIL NEXT TIME, PULL UP YOUR GLOVES, FLIP YOUR VISOR DOWN, AND LET’S GO RACIN’!