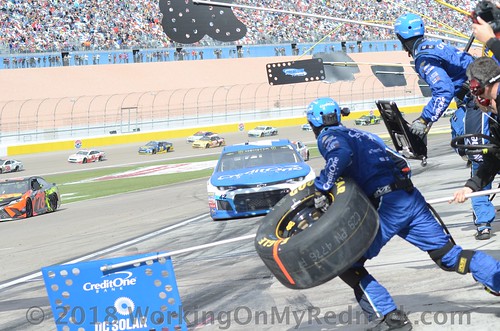 This week NASCAR rolls into “The Windy City”!    In actuality, the race track is located in Joliet, Illinois, about 35 miles southwest of downtown Chicago.  Joliet may be more famous for its federal prison, as well as the home of The Blues Brothers, Joliet Jake and Ellwood Blues, than for its racing complex that includes the 1 1/2 race track, the world-class NHRA drag strip, and the 3/8 mile dirt track.

This week one-fourth of the fantasy league, five players in total, have united in their choice for “Young Money”, Kyle Larson.  Those four players include Carlton The Doorman, Zee, aka Sissy, Bobby Blue Crush, as well as David The Mudslinging Throttle Jockey.  This group collectively are hoping that Larson can shake off the gremlins, drive his Chip Ganassi Racing Chevy to the front of the field, and into Victory Lane for the winning celebration.

There are three drivers, this week, that have a cheering section of three players each.  “Freaky Fast” Harvick has in his corner Kathy The Church Forecloser, Carole, aka Rudy, and Linda R. The Lemonade Lefty.

Likewise, there are three players, Karen The Highly Opinionated Southern Belle, Lonna The Quilt Angel, and Jeremy The Coach, who are putting all their marbles into the marble sack of “Mr. Seven-Time”, Jimmie Johnson.

This week we also have three drivers with two cheering players by their side.  In Clint Bowyer’s copilot seat this week at Chicagoland is Bernie the Bay Area Bandit and Linda B. The Cookie Mom.  Both ladies are hoping that Bowyer can drive his SHR Ford into Victory Lane and hoist the hardware high over his head Sunday.

Meanwhile, Edie the Las Vegas Super Star and Leon Your Most Humble Sheriff has decided that Joey Logano has an excellent of putting his Team Penske Ford into Victory Lane after the checkered flag flies.

Lastly, Jim, aka Chiefy and Doug the Gandy Candy Man are hoping that the 2017 MENCS champ can register back-to-back wins at two diversely different race tracks.