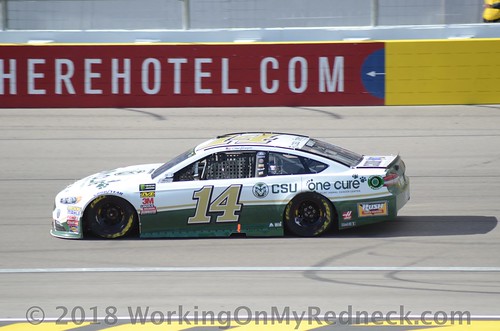 This week the NASCAR haulers roll into Sparta, KY, which just happens to be just across the Ohio River and across the KY-OH border.  Sparta, KY sits just 46 miles Southwest from the heart of downtown Cincinnati, OH.

Now that Clint Bowyer has revived his racing career at Stewart-Haas Racing this year by returning to Victory Lane twice, it appears that the fantasy league has decided to jump onboard the Bowyer bandwagon this week.  Leading this renewed faith in Bowyer this week is Carlton The Doorman, Amber The Cheddar Head, Dan The Numbers Cruncher, as well as Doug The Gandy Candy Man.

This week there are six drivers with two rooters each.  We will discuss those drivers alphabetically.

Linda R. The Lemonade Lefty and our current resident and  “Outhouse Veteran”, Bernie The Bay Area Bandit, are holding steady for one of NASCAR’s young guns, third-generation race car driver, Ryan Blaney.  Both ladies are putting their money where their mouths are this week.

Jerry The Buschwacker and Kathy The Church Forecloser are staunchly behind their man this week, “The Delivernator”, Denny Hamlin.  Each player is hoping that Hamlin busts out of his season-long winless funk and drives his hot rod into Victory Lane at the Kentucky Speedway.

This week Zee, aka Sissy and Jim, aka Ol Chiefy are banding together in their driver choice, joining efforts to support Mr. Seven-Time, Jimmie Johnson.  Both players are betting that this is the race that ol JJ breaks out of his season-long winless situation.

The Kentucky selection for A&M Aggie Sue and Lonna The Quilt Angel is one of the young, and winless in 2018, guns of NASCAR, “Young Money”, Kyle Larson.

Lastly, Jeremy The Coach and Ol Skid-Marc are unanimous in their support for “Sliced Bread”, Joey Logano.

The above mentioned 16 “team” players are hoping that their man will roll their respective hot rods into Victory Lane, hoist the hardware, and give them the desired boost in the fantasy league standings.  But, as always, there are a few individuals, six this week, that are bidnez for themselves.