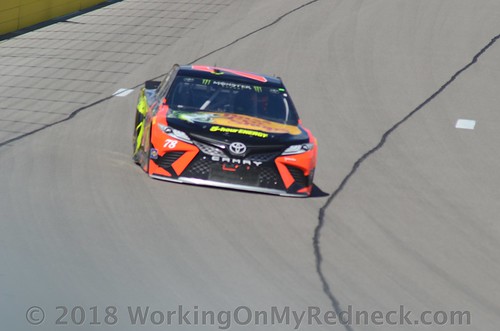 Truex started from the Busch Pole and led 174 of the 267 laps in the Quaker State 400 presented by Walmart. His second straight win at the 1.5-mile Kentucky track was the 19th of his career in the Monster Energy Series.

Truex’s Saturday night romp was similar to his 2017 triumph at the Sparta, Kentucky venue. He prevailed in all three stages for the second straight year, started from the front row in both races and posted similar totals in the laps-led category (174 on Saturday night vs. 152 last season).

Kilimanjaro Bobby must have been looking into his crystal ball or reading his tea leaves this week because he was the only player to be riding shotgun with the race winner, Martin Truex, Jr. this week!  Bobby Blue Crush knocked it out of the ballpark with the maximum race score, 60 points, that Truex deposited into his totals.  Those 60 points really have boosted Blue Crush’s race credibility this week!

Three players racked up 50 points at Kentucky Speedway.  While Linda R. The Lemonade Lefty and Bernie The Bay Area Bandit were rooting for third-generation race car driver, Ryan Blaney, this week, Snoopy received her score from hanging tough with Kyle Busch this week.

Even though “Young Money”, Kyle Larson, had an up and down race at Kentucky, he provided A&M Aggie Sue and Lonna The Quilt Angel with a very nice shot in the arm and 37 points.

Rounding out the top five scorers of the week is a quintet of players that include Carole, aka Rudy, Carlton The Doorman, Amber The Cheddar Head, Dan The Numbers Cruncher, as well as Doug The Gandy Candy Man.  This motley crew racked up 35 points this week.  Rudy received her points from Kurt Busch’s 6th place finish, while the other four players were rewarded with their points from Clint Bowyer’s 12th place finish.

The leaderboard, once again, looks like the names were placed into a blender, pushed the pulse button and poured out1  Of the twenty-two players in the fantasy league, nineteen changed zip codes this week!  Only our leader The Quilt Angel, The Gandy Candy Man, and A&M Aggie Sue remained in their previous places this week.

The biggest mover of the week is Kilimanjaro Bobby, who rocketed up the totem pole eight (8) positions to sit now in 7th place!

Snoopy Dawn and Jim, aka Chiefy, each moved three spots this week.  Whereas Snoopy stepped up three (3)  places to reside in 16th place, Chiefy stumbled and fell three places to own the 17th place this week.

Six players, Linda R. The Lemonade Lefty, Zee, aka Sissy, Edie The Las Vegas Super Star, Linda B. The Cookie Mom, as well as Ol Skid-Marc moved two (2) positions this week.  The Lemonade Lefty and Rudy were fortunate enough to step up their game and move up two spots to sit in 2nd and 15th, respectively.  However, Sissy, The Vegas Super Star, The Cookie Mom, as well as Skidz tumbled two places to sit in 8th, 14th, 18th, and 21st, respectively.

The remaining 10 players moved, either up one place, or down one spot.

Trying to award “The Crapiest PIck of The Week” was a chore this week.  Usually, the winner is a player who could only muster a single digit score, however, not this week!  This week we have two players sharing this award, Kathy The Church Forecloser and Jerry The Buschwacker, both players really had a reasonable week at the track, scoring 21 points from Denny Hamlin’s 16th place finish at Kentucky.  But because their score of 21 points was the lowest accumulated for the week they get to share “The Crappiest Pick of The Week” award.

After a couple of weeks holding down the fort in “The Outhouse” Bernie The Bay Area Bandit was evicted this week by our man Ol Skid-Marc!

Check out the results of the Quaker State 400.

It is beginning to look like Martin Truex, Jr. and his Furniture Row Racing crewmembers are shifting gears, making their run towards a second MENCS championship, and working on their dream!

Next week our attention will move to the Northeast, Louden, NH.