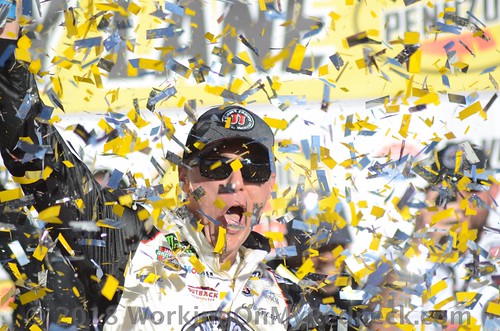 Busch retained the lead. But Harvick took more aggressive action on Lap 295 of 301, “touching” and tagging Busch’s car in the center of Turns 1 and 2. Busch slid up the track as Harvick powered the No. 4 Stewart-Haas Racing Ford into the top spot.

Six laps later, Harvick took a checkered flag for a series-best sixth time this season. He won for the third time at the Magic Mile and the 43rd time in his career, 18th on the career list and one victory behind NASCAR Hall of Famer Bill Elliott.

Harvick had no regrets about seizing the opportunity to take the win.

“I didn’t know if I was going to get there at the end, and I felt like that was best opportunity — do what I had to do to win,” said Harvick, who pulled away to win by 1.877 seconds. “I didn’t want to wreck him, but I didn’t want to waste a lot of time behind him.

This week Snoopy Dawn was the only player that was riding in the copilot’s seat with “Freaky Fast” Kevin Harvick as he led the field to the checkered flag.  Harvick’s win rewarded Snoopy with 51 much-needed points.

This week we have three players, Snoopy Dawn, Bernie The Bay Area Bandit, and Dan The Numbers Cruncher who racked up 51 points at Louden.  Even though these players received the same score, 51 points, they all were backing different drivers!  As was mentioned above, Snoopy was rooting for the race winner, “Freaky Fast” Harvick, Dan The Numbers Dude had his money on Martin Truex, Jr., while The Bay Area Bandit had all her marbles in the sack of Chase Elliott.

There were six players were added 45 points to their second segment tally this week.  Those six players include Leon Your Most Humble Sheriff, Lonna The Quilt Angel, Jeremy The Coach, Amber The Cheddar Head, David The Mudslinging Throttle Jockey, and Doug The Gandy Candy Man.  The Sheriff, The Quilt Angel, The Cheddar Head, The Throttle Jockey, and The Candy Man were all riding shotgun with Kyle Busch, however, The Coach was hanging with the senior Busch brother, Kurt.

Only three players remained in their previous position, our leader The Quilt Angel, The Lemonade Lefty, and our “Outhouse” resident, Ol Skid-Marc!  The other nineteen players changed positions after the checkered flag flew at Louden.

The single largest mover this week was Bobby Blue Crush who plummeted eight (8) places to take up residence in a three-way tie for 15th place.

After the Sunset at Louden, Karen The Highly Opinionated Southen Belle dropped like a Prom Dress, falling six (6) spots to sit in 18th place.

On the brighter side, both Doug The Mongoose and Dan The Numbers Dude stepped up four (4) places to sit comfortably in 4th and 7th place, respectively.

Three players are jointly sharing “The Crappiest Pick of The Week”.  Those three players, Kathy The Church Forecloser, Bobby Blue Crush, as well as Linda B. The Cookie Mom, could only muster a microscopic 5 points this week, and therefore are our weekly recipients of this award.

Once again our man in “The Crapper” is Ol Skid-Marc, although The Cookie Mom is making a late segment run on “The Outhouse”, and could evict Ol Skidz as early as next week if she has another “Crappy” week like she had this week!.

Check out the results of the Foxwoods Resort Casino 301 at Louden.

Next week NASCAR returns to the Pocono Mountains of PA.