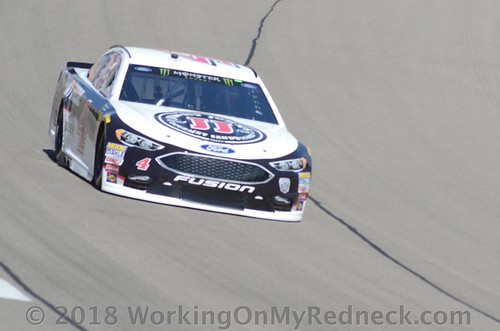 This week NASCAR makes its second trip this summer to “the honeymoon capital” of the US, the Pocono Mountains of PA.  By the time you read this post, the haulers will be on their way to the “Tricky Triangle” near Long Pond, PA.

This week the choices are widely scattered with small groups of support for six different drivers.  Weekly there is usually an overwhelming support for one particular driver, however, this week that is not the case.

The largest support for any one driver, this week, is three players banding together for “Freaky Fast” Kevin Harvick.  These players supporting “The Closer” include Lonna The Quilt Angel, Ol Skid-Marc, and Dan The Numbers Cruncher.  Each player is hoping that Harvick can go back-to-back with victories, to win two times this month and deliver a big number to them to catapult them up into a money paying position by the end of the segment.

Likewise, Linda R. The Lemonade Lefty and Bobby Blue Crush are leaning heavily upon Clint Bowyer to deposit a big score into their segment tallies when the checkered flag flies at Pocono.  Bowyer has already won two times this season and is eagerly looking for number three.

Kathy The Church Forecloser and Jeremy The Coach think that Kyle Busch will reward them nicely Sunday with some big points and win two times in the month of July.

Meanwhile, Linda B. The Cookie Mom and Amber The Cheddar Head will be cheering loud and proud for William Clyde Elliott, Jr., more widely known as Chase Elliott, Chase is long overdue to break out and post his very first career Cup victory.  Could this be the race that thrusts him into the Playoffs?

Carlton The Doorman and Jerry The Buschwacker together are solidly behind Mr. Seven-Time, Jimmie Johnson, and must think that this week he will erupt from his 2018 winless slump and hoist the hardware at Pocono.

Lastly, Doug The Gandy Candy Man and Leon The Retired Airline Captain, Part-time Cardiologist and Strawberry Picker, as well as Your Most Humble Sheriff are backing “Blazingly Bad” Brad Keselowski this week.  Blazingly Bad Brad has raced well this season, however, he has come up on the short end of the stick in many of the races.

That leaves nine players are strikingly absent in this post.  That can only mean that those individuals are In bidnez for themselves!

Good luck to all at Pocono!