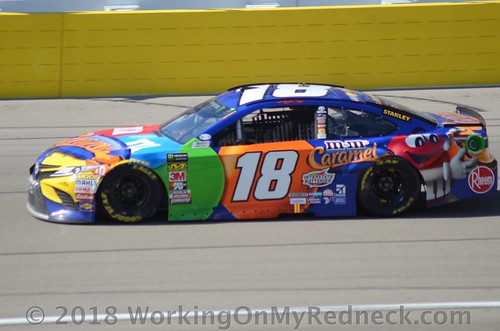 A post-qualifying inspection failure? No problem.

A starting position deep in the field for Sunday’s Gander Outdoors 400 at Pocono Raceway? Just another challenge for Kyle Busch to overcome.

Suarez, running down a dream, started from the pole and finished a career-best second, 1.788 seconds behind Busch, who collected his second victory at the 2.5-mile Tricky Triangle and the 49th of his career, tying him with Tony Stewart for 13th on the all-time win list.

With the triumph, Busch completed a weekend sweep at Pocono, having tied NASCAR Hall of Famer Ron Hornaday Jr. for the NASCAR Camping World Truck Series career lead at 51 with his win in Saturday’s Gander Outdoors 150.

This week we have two players who are sharing this award.  Both Kathy The Church Forecloser and Jeremy The Coach were running down a dream and riding shotgun with the race winner, Kyle Busch.  Even though “Rowdy” won the race at Pocono, he did not score the most points in the Gander Outdoors 400.

Notwithstanding the fact that Kyle Busch won the race, he did not, however, gather up and earn the most points at Pocono.  The driver who scored the most points at Pocono is Kevin Harvick.   Lonna The Quilt Angel, Ol Skid-Marc, and Dan the Numbers Cruncher were betting the farm that “Freaky Fast” Harvick would add another victory to his 2018 tally.  He didn’t win the race, but he paid them back with 52 points.

Amber The Cheddar Head put all her marbles in the marble sack of William Clyde Elliott, Jr., aka Chase.  Chase ran up front, in the top ten all race long, and because of that The Cheddar Head received 49 points for all of Chase’s consistency and aggressive racing at Pocono.

As was mentioned previously, The Church Forecloser and The Numbers Dude picked the race winner, Kyle Busch, but only scored 47 points for the race!

Rounding out the top five scorers for the week is Linda R. The Lemonade Lefty and Bobby Blue Crush.  Both players were rooting for, and riding shotgun with, Clint Bowyer.  Bowyer grabbed an 11th place finish and delivered 39 points to these two players.

This week, once again, the scoring pylon looks like it was in the middle of a tornado somewhere in the midwest.  Only three out of the twenty-two players remained in the previous position at the end of the race.  Those three players are our points leader Lonna The Quilt Angel, Linda R. The Lemonade Lefty, and Snoopy Dawn, the other nineteen players caromed and ricocheted all over the leaderboard.

The biggest mover of the week is Doug The Gandy Candy Man.  The Candy Man scored a very minuscule one (1) point, thus free-falling nine (9) places to crashland in 13th place.

Not far behind The Candy Man this week is Leon The Retired Airline Captain, Elephant Driver, Part-Time Cardiologist and Strawberry Picker, and of course Your Most Humble Sheriff, who like The Candy Man, could only muster up one (1) microscopic point this week!  Your Most Humble Sheriff dropped like a Prom Dress this week, falling eight (8) spots to sit all the way down in 11th place!

Conversely, Jeremy The Coach rocketed up the scoring pylon six (6) positions to reside in 10th place this week.

Rounding out the top five movers is a group of five players, Dan The Numbers Cruncher, Amber The Cheddar Head, Edie The Las Vegas Super Star, Jim, aka Chiefy, and Bernie The Bay Area Bandit.  The Numbers Dude, The Cheddar Lover, The Vegas Super Star, and Chiefy all moved four (4) places up the leaderboard this week parking themselves in 3rd, 4th, 8th, and 15th, respectively.  However, The Bay Area Bandit slid down the scoring pylon to be in a tie for 18th place.

This week we have two players sharing “The Crappiest Pick of The Week” award,  Both Leon Your Most Humble Sheriff and Doug The Mongoose could only add one (1) microscopic point to their totals this week.  Both players were riding with “Blazingly Bad” Brad Keselowski at Pocono when he blew a right rear tire and tried to knock down the turn 2 retaining wall!

There was some positive news, at least for Ol Skid-Marc this week.  Skidz picked Harvick this week, scored 52 points, and was evicted out of The Outhouse by A&M Aggie Sue!  Aggie Sue has taken over control of The Outhouse this week!

Next week it is on to the Finger Lakes region of upstate New York, to the tiny hamlet of Watkins Glen, NY.

Who will be the next driver to run down his dream and punch his ticket to the Playoffs?