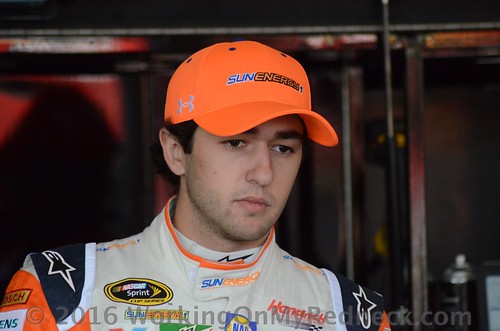 History will record that Chase Elliott won his first Monster Energy NASCAR Cup Series race by a whopping 7.560 seconds over reigning champion Martin Truex Jr.  But what history will not record is that Chase has been working on a dream of winning races at the highest NASCAR level, like his father did a few decades earlier.  What history will not record is that, with the retirement of Dale Earnhardt, Jr., there is a gaping hole left in the sport and a question to be answered as to who will take over the role of the fan favorite race car driver.

Today, race fans, that question has been answered!  And his name is Chase Elliott!

That historical description, however, doesn’t do justice to Elliott’s magnificent drive over the final 32 laps of Sunday’s Go Bowling at the Glen, with Truex hounding him every inch of the way before running out of fuel with two corners left.

“Holy cow, I don’t know what to say—just so thrilled, so emotional, so much relief,” said Elliott, who notched his first win in NASCAR’s foremost series in his 99th start, after recording eight second-place finishes. “Working on three years, I hadn’t won one.

“I came here with a great opportunity today, and I was able to get it done.”

The victory came with a sense of accumulating tension that was almost palpable, as Truex repeatedly closed up on Elliott in the braking zones but couldn’t make a run off the corners.

And then there was the final lap. There were audible gasps when Elliott wheel-hopped into Turn 1 and lost the six-car-length advantage he had built on the second half of the 2.45-mile road course on the penultimate lap.  We all had seen this movie before when Elliott could not close the deal.  However, this movie had a much different, a much anticipated, and a much happier ending at The Glen.

After finishing second eight different times, just like his dad did, William Clyde Elliott, Jr. won his first MENCS race at a road course, just like his dad, Awesome Bill From Dawsonville, did several decades ago.

Only one player had the foresight to bet the farm on Chase Elliott at The Glen, Bobby Blue Crush.  Even though Kilimanjaro Bobby selected the winner of the race, Chase did not deliver the most points this week.  Blue Crush racked up 50 points with the win.

The highest scoring the layer this week is our resident dirt tracker, David The Mudslinging Throttle Jockey.  The Throttle Jockey was riding through this Finger Lakes region race course with the driver who was in hot pursuit of Chase in the closing laps, Martin Truex, Jr.  Even though Truex did not win the race, with his stage points and the points from the race, delivered 51 much-needed points to The Throttle Jockey.

As mentioned above Bobby Blue Crush racked up 50 points, making him the second highest scoring player.

Carlton The Doorman had an equally good outing in update New York.  The Doorman saved his usage of Kyle Busch til NASCAR arrived at this high-speed road course.  Fortunately, KyBu had a good outing, finished in 3rd place, and delivered to The Doorman 43 points.

Meanwhile, Jeremy The Coach and Bernie The Bay Area Bandit, betting the farm on Jamie McMurray, was rewarded with 35 points from Jamie Mac’s seventh-place finish at The Glen.

Rounding out the top five scorers for the week is a duo consisting of Snoopy Dawn and Leon Your Most Humble Sheriff.  This unlikely duo was packed up and riding shotgun with the only international driver in NASCAR, Daniel Suarez.  Both Snoopy and The Sheriff added 34 points to their 3rd segment totals.

When the checkered flag flew and the race concluded, the leaderboard reflected that nineteen (19) players changed places!  Only our leader, Lonna The Quilt Angel, Leon Your Most Humble Sheriff, and the Princess of The Poophouse, A&M Aggie Sue, remained in their previous places.

Bobby Blue Crush, on the other hand, rocketed up six (6) positions to sit in 6th lace this week.

Having almost as good of a race weekend as Blue Crush is David The Mudslinging Throttle Jockey.  The Throttle Jockey climbed up five (5) spots to sit comfortably in 14th place.

Carlton The Doorman fared pretty well this weekend moving up three (3) positions to be in contention for some Segment Money and owning the 4th place this week.

The Crappiest Pick of The Week this week is solely owned by Kathy The Church Forecloser.  The Church Forecloser had put all her marbles into the marble sack of Joey Logano who retired very early in the race with mechanical issues.  Sliced Bread’s early exit from the race earned her a whopping one (1) point for the race!

No matter how poorly The Church Forecloser did this week it was not even close enough to drop her into The Outhouse.  No, A&M Aggie Sue still controls The Outhouse, and is not too close to an eviction notice yet!

Just an FYI:  The siren atop the Dawsonville Pool Hall resurrected the old tradition from the Awesome Bill From Dawsonville days.  Sunday, they let the siren sound after Chase’s victory at The Glen!

Next week NASCAR rolls back into Michigan for the final race there for 2018.

TIL  NEXT TIME, PULL YOUR GLOVES UP, FLIP YOUR VISOR DOWN, AND LET’S GO RACIN”!