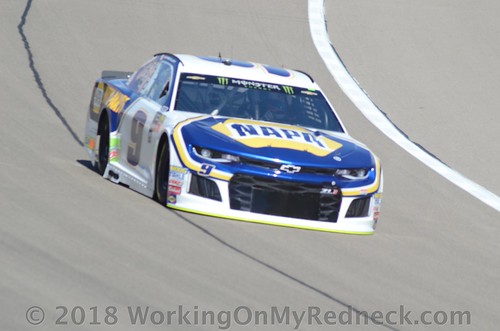 This week NASCAR rolls back into the Irish Hills of Michigan for the second and final race of the season at Michigan International Speedway.  Even though this race track is centrally located, right in the middle of nowhere, it is, in fact, less than 90 miles from the heart of Motown, Detroit city.  Both Ford and Chevrolet take great pride in putting one of their respective hot rods into Victory Lane each time they race at MIS.

Many of our players, five this week, are banding together and are full-throated in their support at Michigan for the kid who stepped out from the long shadow of his legendary father last week, Chase Elliott.  Those five players include our present leader, Lonna The Quilt Angel, Jeremy The Coach, David The Mudslinging Throttle Jockey, Dan The Numbers Cruncher, as well as Doug The Gandy Candy Man who are collectively hoping that Chase could show the field the fast way around MIS and lead the field to the checkered flag.  Could Chase go back-to-back?  Could this be magic?

Karen The Highly Opinionated Southern Belle, Carlton The Doorman, as well as Amber The Cheddar Head are fully backing the driver formally known as “The Outlaw”, but is more recognizable now as Kurt Busch, this weekend at Michigan, and hoping that he can punch his ticket into the Playoffs with a victory.

There are four drivers that have amassed a rooting section of two players each for Michigan.  Zee, aka Sissy, and Ol Skid-Marc have pulled out the stops this week with their choice.  Sissy and Ol Skidz are really hoping that the rookie, William Bryon, can get his first very MENCS win and add another victory to the Hendrick Motorsports tally Sunday.  Maybe this could be magic?

Meanwhile, Kathy The Church Forecloser and Leon Your Most Humble Sheriff have put all their support behind “Young Money”, Kyle Larson, this week in hopes that he can lock himself into the Playoffs with a victory.

Additionally, Bobby Blue Crush and Linda B. The Cookie Mom are riding shotgun with “Sliced Bread’, Joey Logano.  Both would love to see Logano add another victory to his 2018 totals this week.

Lastly, Jerry The Buschwacker and Edie The Las Vegas Super Star would love to see Jamie McMurray steal the show, pull off some magic, drive his hot rod into Victory Lane, and hoist the hardware at Michigan.

Once again we have six players who think of themselves as independent players.  However, we all know the truth, they are really in bidnez for themselves!