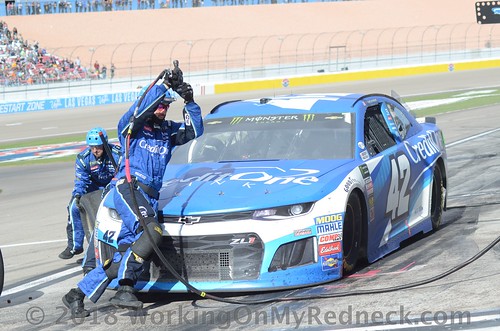 This week the NASCAR haulers roll northeast up I-81 to the Northeast corner of Tennesse and the Southern border of Virginia.  At this location of the country is an area known to racers as “Thunder Valley”.  It the location of the Last Great Colosseum, the fastest half-mile race track in the world, Bristol Motor Speedway.

Nearly one-third of The Redneck Fantasy League, six players in total, are hoping that “Young Money”, the Elk Grove, CA native, Kyle Larson, this week at world’s fastest half-mile race track will not let them down.  Those six players who are betting the farm on Larson are Jeremy The Coach, Amber The Cheddar Head, Edie The Las Vegas Super Star, Jim, aka Chiefy, Bernie The Bay Area Bandit, and Linda B. The Cookie Mom.

Meanwhile, one-fifth of the players, four players are all in for “The Delivernator”, Denny Hamlin.  The list of those who are in Hamlin’s corner this week consists of Carole, aka Rudy, Carlton The Doorman, Snoopy Dawn, as well as Dan The Numbers Cruncher.

These two drivers have the support, when combined, just about one-half of all players in The Redneck Fantasy League!  That is a sizable chunk of the players.

Additionally, we have two drivers, this week that have a couple of players each rooting for their success at Bristol.  Jerry The Buschwacker and Lonna the Quilt Angel are teaming up to root home young Ryan Blaney.

Lastly, Karen the Highly Opinionated Southern Bell and Doug The Gandy Candy Man are really hoping that Joey Logano will not let them down and can add his second 2018 win to his resume this week at Bristol, baby.

I have mentioned fourteen of our players above.  Doing math in public, twenty-two minus fourteen leaves eight players that are independent thinkers this week.  But what we really know is that those eight players are actually in bidnez for themselves!

Good luck to all at Bristol!