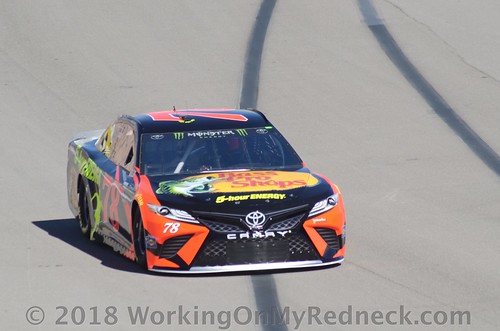 Most all of the NASCAR drivers dream of winning at “The Track Too Tough To Tame”!  These dreams are real and are substantive!

FYI: Most of you will be reading this post as I reposition my motorhome from two months of 70 laid back degrees on the Southern Oregon Coast to the heart of Wine Country, Calistoga, CA.  This weekend, in Calistoga, will be some of the finest wingless 410 sprint car races, as well as the mighty screamin’ midgets.  It will also be a weekend of hanging out with a few of our Redneck Fantasy League brethren, Doug The Gandy Candy Man, Bernie The Bay Area Bandit, (actually been hanging out with her and her hubby, as well as Jim, aka Chiefy and Edie The Las Vegas Super Star for the last two months!), as well as watching and encouraging David The Mudslinging Throttle Jockey racing his mighty midget at Calistoga!

For the next four weekends, Your Most Humble Sheriff will most definitely be #WorkingOnMyRedneck with photo credentials at Calistoga and the Vegas NASCAR race weekend.  The additional weekends will include The Gold Cup at Chico and the last weekend of Sept at Perris Auto Speedway for more wingless 410 sprinters to end the summer vacation.

This week the fantasy league has sought out seven drivers to support for annual ‘Throwback Darlington” race.  In just the last few years the management at Darlington has struck upon a theme that has rekindled the fervor at Darlington with the classic throwback theme.  It has really caught on and has turned out to be extremely popular.  The above photo is a dead giveaway that Martin Truex, Jr. is the favored driver this week in The Redneck Fantasy League with a rooting section that includes Linda R. The Lemonade Lefty, Ol Skid-Marc, Snoopy Dawn, and yours truly, Leon Your Most Humble Sheriff.

With nearly as much support at Darlington, this week is “The Delivernator”, Denny Hamlin.  Hamlin has an unlikely trio of players, Bobby Blue Crush, Zee, aka Sissy, and Dan The Numbers Cruncher, who all are hoping to start off the last segment of 2018 with some big numbers!

There are five drivers that have lined up the support of two players each this week.  Kathy The Church Forecloser and Doug The Gandy Candy Man believe that Clint Bowyer can snag his third win of the 2018 season, at least they are hoping so.

Kurt Busch has been drafted by the duo of Jim, aka Chiefy, and Linda B. The Cookie Mom.  Both players will be following the progress of last week’s race winner, “The Outlaw”, at “The Lady Dressed In Black”.

Meanwhile, A&M Aggie Sue and Bernie The Bay Ara Bandit are joining forces in the support of the younger Busch Brother, “The Shrub”.  If past is prologue, and keeping up with Kevin Harvick, it just may be the time that “Rowdy”, aka Kyle Busch, notch another victory on his 2018 resume.

Even though Brad Keselowski has been somewhat quiet so far this season, David The Mudslinging Throttle Jockey and Amber The Extremely Lucky Cheddar Head think that “Blazingly Bad” Brad will bust out of his slump and score a victory at Darlington.

Lastly, Carlton The Doorman and Jerry The Buschwacker are putting all their marbles into the marble bag of “Sliced Bread”, Joey Logano.

After adding up the players who have joined forces above, the total is seventeen (17).  The remaining five (5) players remain totally independent and in bidnez for themselves at Darlington.