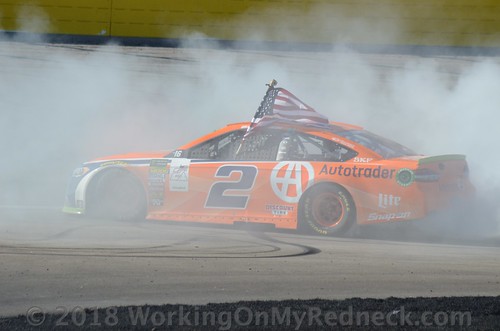 In a war of attrition that caused a multitude of problems for the majority of Monster Energy NASCAR Cup Series Playoff contenders, Brad Keselowski emerged unscathed with his third straight victory in the series and the 500th triumph for Team Penske in all forms of racing combined.

With his third victory of the season, his third at  Las Vegas and the 27th of his career, Keselowski guaranteed himself a spot in the second round of the playoffs.

This week we have three players who had selected “Blazingly Bad’ Brad Keselowski to win the first playoff race at Las Vegas.  Those three players include Jerry The Buschwacker, Kathy The Church Forecloser, and Leon Your Most Humble Sheriff.  Each one of these players racked up a very cool 50 points this week.

The Movers And The Shakers

Snoopy Dawn was the lone player who was yelling her head off in those last few laps, hoping that “Sliced Bread”, Joey Logano, could outlast and outmaneuver the front-runners for the victory.  Nevertheless, Snoopy was able to ad 42 points to her 3rd segment totals.

Meanwhile, David The Mudslinging Throttle Jockey and Dan The Numbers Cruncher were heartbroken today when their man, “Young Money”, Kyle Larson, couldn’t close the deal and drive his hot rod into Victory Lane.  However, “Young Money” paid a nice 36 points to these gentlemen today.

Seven players racked up 35 points each after overtime and the checkered flag waved.  Not all seven players had selected the same driver, but the results were the same.  Carlton The Doorman, Edie The Las Vegas Super Star, Jim, aka Chiefy, Carole, aka Rudy, Linda B. the Cookie Mom, as well as Jeremy The Coach were all hoping that the Las Vegas native, Rowdy, aka Kyle Busch, could drive his hot rod into Victory Lane.  KyBu could only score a 7th place finish.  Bernie The Bay Area Bandit, likewise, racked up 35 points coming from Ryan Blaney’s 5th place finish.

Rounding out the top five scores this week is Bobby Blue Crush and A&M Aggie Sue.  Blue Crush and Aggie Sue teamed up with the soon to be unemployed Kurt Busch.  KuBu’s good stage finishes and his 21st finish gave these two players 32 points for the day.

Once again, early into the segment, there was wide and occasionally, large-scale movement!  Even though one-third of the players remained in their previous spots, the other two-thirds moved around like an 8.0 earthquake!

The largest movers this week were Amber The Extremely Lucky Cheddar Head and Leon Your Most Humble Sheriff.  The Extremely Lucky Cheddar Head was not very lucky at Vegas, dropping like a prom dress nine (9) places to sit in 13th place.  Whereas Your Most Humble Sheriff hit the jackpot and rocketed up the scoring pylon nine places to rest in 8th place!

This week Ol Skid-Marc lived up to his nickname!  Try as he might Skidz laid a black mark all the way down “The Strip” as he tumbled uncontrollably five (5) spots to land in 17th place.

There were five players that moved around the totem pole four (4) places at the end of Sunday night.  Those five players include Snoopy Dawn, Dan The Numbers Cruncher, Linda R. The Lemonade Lefty, Kathy The Church Forecloser, as well as Zee, aka Sissy.  Snoopy, The Numbers Dude, and The Church Forecloser stepped up their game moving into 3rd, 12th, and 16th places respectively.  Unfortunately, The Lemonade Lefty and Sissy did not fare so well.  Both ladies tumbled four spots to park themselves in 15th and 19th, respectively.

Lastly, there were five players who just moved next door from their previous domiciles.  Those five players include Jeremy The Coach, Carlton The Doorman, Doug The Gandy Candy Man, Edie The Las Vegas Super Star, as well as Lonna The Quilt Angel.  Both The Doorman and The Las Vegas Super Star moved up one place to sit now in 7th and 21st, respectively.  Conversely, The Coach, The Gandy Candy Dude, and The Quilt Angel slipped one place to now own 4th, 20th, and 22nd, respectively.

It was a tough battle this week, however, Zee, aka Sissy, secured this week’s “Crappiest Pick of The Week” award!  Sissy was only able to score a paltry 3 points this week from Ty Dillon!

We have a new cellar dweller this week, Lonna The Quilt Angel  Through her whopping 11 points scored this week she was able to send an eviction notice to The Las Vegas Super Star and replace her securely in The Outhouse!