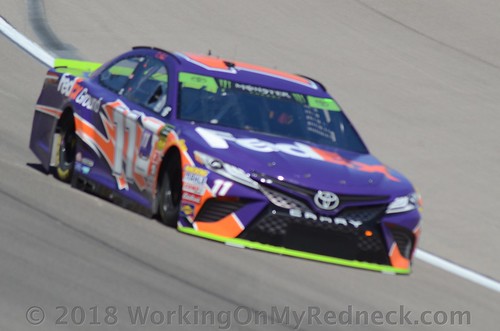 Now that the storm has moved through the area and wreaked havoc and destruction in the Mid-Atlantic area, it is time for NASCAR to roll north on I-95 Richmond, VA and wreak another type of havoc!  When the checkered flag waves at Richmond a ticket will get punched for a driver into the Round of 12, and quite possibly a nose or two might get punched by some driver after the race!

This week is like a few weeks of this race season where the bulk of The Redneck Fantasy League is joining forces for one particular race car driver.  this week one-quarter of the troops are jumping on the Denny Hamlin bandwagon!  Those who are jumping onboard with Denny are Amber The Extremely Lucky Cheddar Head, Jerry The Buschwacker, Snoopy Dawn, Lonna The Quilt Angel and, of course, Leon Your Most Humble Sheriff.

We have two drivers that have a fan base of three players each this week.  It seems that Edie The Las Vegas Super Star, Jim aka Chiefy, and Linda B. The Cookie Mom are joining forces this week to support and cheer on “Young Money”, Kyle Larson.  All three are really hoping that Larson will punch his ticket to the round of 12 this week.

Additionally, Kathy the Church Forecloser, Bobby Blue Crush, as well as Jeremy The Coach are putting all their faith, and all their marbles, with “Sliced Bread”, Joey Logano this week.

We also have four drivers that have a pair of rooters backing them at Richmond this week.  Young Ryan Blaney has Zee, aka Sissy, and Karen The Highly Opinionated Southern Belle in his corner.  Both are hoping that this third generation driver can usher his hot rod into Victory Lane at the end of the day.

Carlton The Doorman and Ol Skid-Marc, however, have a very different take on the end results of the race at Richmond.  Both of these players are really hoping that Kurt Busch will wake up from his mundane summer performance and drive his Ford right into Victory lane.

Meanwhile, A&M Aggie Sue and Carole, aka Rudy, think that “Blazingly Bad” Brad Keselowski can go four-for-four!  It has been a long time since a driver has won four races in a row, but these two ladies are betting the farm that Ol Kes can make that happen this week!

Lastly, David The Mudslinging Throttle Jockey and Dan The Numbers Cruncher are hoping that Martin Truex, Jr. can continue on his quest to give Barney Visser, his team owner, a championship as Furniture Row Racing ceases operations at season’s end, by punching his ticket to the round of 12.

This week we only have three players who are in bidnez for themselves!