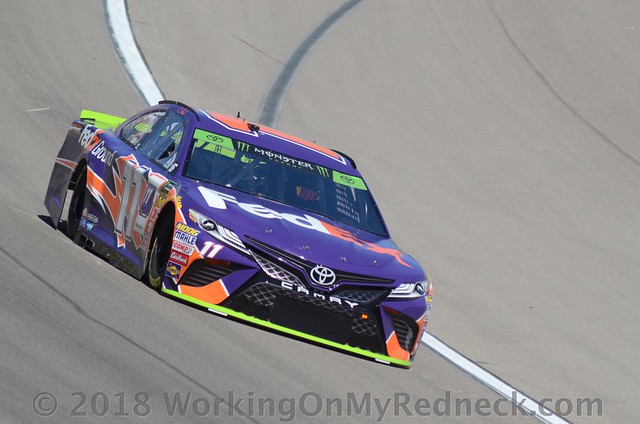 This week NASCAR will have its second home race at Charlotte Motor Speedway of the season,  The difference this time around is that Bruton Smith and the SMI folks have turned this race at CMS into a “roval” race.  Using the term “roval” at Charlotte means that this race will run on part of the 1 1/2 mile oval then go into the infield to add a road course of left and right turns, kind of like what the Rolex Series cars do at Daytona.

Since the race at Charlotte is an elimination race, there is one thing to remember, desperate people will do desperate things in desperate times!

This week the hot driver in The Redneck Fantasy League appears to be “The Delivernator”, Denny Hamlin.  There are four players, Karen The Highly Opinionated Southern Belle, Edie The Las Vegas Super Star, A&M Aggie Sue, as well as Ol Skid-Marc are all in, betting the farm on Hamlin.  Hamlin is down 29 points below the cutoff point and desperately needs to win this week to move on to the Round 12!

Lonna The Quilt Angel, Carlton The Doorman and David The Mudslinging Throttle Jockey are putting their marbles in the marble sack of Clint Bowyer.  All Three players are hoping that Bowyer can punch his ticket to the Round of Twelve with a victory Sunday.

Meanwhile, Snoopy Dawn, Bernie The Bay Area Bandit and Doug The Gandy Candy Man are lining up behind the driver formally known as “The Outlaw”, now better known by his given name of Kurt Busch.

However, Bobby Blue Crush, Linda B. The Cookie Mom, as well as Leon Your Most Humble Sheriff are hoping that Jimmie Johnson, can finally get off of the snide and record his first victory of the 2018 season.

This week we have six players who are priding themselves in being independent thinkers and are totally in bidnez for themselves!