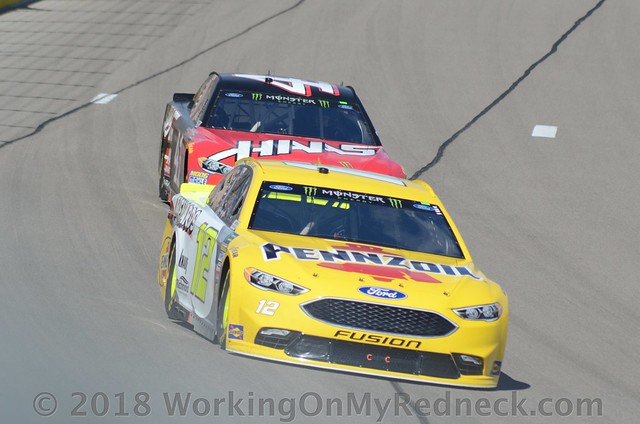 In a race that was as wild as advertised in the closing laps, Ryan Blaney sped past crashing Jimmie Johnson and Martin Truex Jr. in the final corner to win Sunday’s inaugural Bank of America ROVAL 400 at the Charlotte Motor Speedway Road Course.

With his first Monster Energy NASCAR Cup Series victory of the season and the second of his career, Blaney advanced to Round of 12 in the Playoffs.

Johnson wasn’t as lucky. The seven-time series champion was pressuring Truex on the final lap and powered his No. 48 Hendrick Motorsports Chevrolet Camaro ZL1 to the inside of Truex’s No. 78 Furniture Row Racing Toyota Camry off the banking of Turn 15 coming into the frontstretch chicane.

Johnson spun and collected Truex as he slid across the asphalt between Turns 16 and 17, knocking Truex’s Toyota toward the outside wall in the tri-oval. Blaney drove his No. 12 Team Penske Ford Fusion between the two wrecked cars and crossed the finish line .792 seconds ahead of runner-up Jamie McMurray.

Because he had blown the chicane, Johnson stopped on the frontstretch as mandated by NASCAR before continuing across the finish line. He finished eighth and ended the event tied for 11th in the Playoff standings with Aric Almirola and Kyle Larson, who completed the final lap in a car that had been all but destroyed in a Turn 1 wreck after a restart on Lap 104 of 109.

Almirola and Larson got the final two berths into the Round of 12 on a tiebreaker based on the best finish in the current round. Larson was second at Las Vegas, and Almirola took fifth place at Richmond. Johnson’s best result was the eighth at Charlotte, leaving him on the outside with Austin Dillon, Denny Hamlin, and Erik Jones, who also were eliminated from the Monster Energy Series Playoffs in Sunday’s cutoff race.

There was only one player, Linda R. The Lemonade Lefty, who was foresightful enough to hold on to her Blaney choice until this week at the Charlotte Roval.  Even though it looked as though the winner was going to be either Martin Truex, Jr., who was leading the race all the way to the front straight chicane, or Mr. Seven-Time, Jimmie Johnson, was dogging Truex for the win.  And all Hell broke loose when JJ dive bombed Truex in the chicane for the win, lost control of his hot rod, and knocked both of them out of contention for the win!  Then, along came, slow talking, slow walking Jones, in the name of third place Ryan Blaney to steal the win!

Following The Lemonade Lefty on the scoring pylon this week is a motley trio consisting of Snoopy Dawn, Bernie The BayArea Bandit, and Doug The Gandy Candy Man.  All three players were all in with Kurt Busch at the Roval.  KuBu secured a fifth-place finish and rewarded these three players with 49 points for their support.

Rounding out the top five scorers this week is Jerry The Buschwacker.  The Buschwacher was riding shotgun with Chase Elliott all race and added a very cool 42 points to his 3rd segment tally.

After the checkered flag waved at Charlotte there was havoc in the standings!  Even though only 2/3 of the players moved in the standings, glass half full, some of those players’ fall from grace was dramatic!  The biggest movers this week were Carole, aka Rudy, and Dan The Numbers Cruncher.  Both of these players are now fully knowledgeable about the characteristics of gravity, having plummeted seven (7) spots to land in 10th and 11th places, respectively.

Conversely, Kilimanjaro Bobby and Leon Your Most Humble Sheriff stepped up their game this week by climbing up four (4) places to sit in 7th and 8th places, respectively.

There was a quartet of players, Doug The Mongoose, Linda R. The Lemonade Lefty, Kathy The Church Forecloser, and Ol Skid-Marc that moved two (2) spots.  Both The Mongoose and The Lemonade Lefty moved up two positions in the scoring pylon to sit now in 15th and 16th places respectively.  However, The Church Forecloser and Ol Skidz were not so fortunate this week, sliding down two places to rest in 18th and 19th, respectively.

This week “The Crappiest PIck of The Week” goes to Zee, aka Sissy.  Sissy could only muster 6 points this week from “Blazingly Bad” Brad Keselowski!  For the second week Lonna The Quilt Angel is in firm control of the Outhouse!  Even though it is a very tight race between The Quilt Angel, Sissy, and The Las Vegas Super Star,  there are only 3 points between these young ladies this week, Lonna has not been evicted yet!

Nest week NASCAR is off to the Mid Atlantic States, in particular, Dover, Delaware.

Check out the results of the Bank of America Roval 400 at Charlotte Motor Speedway.