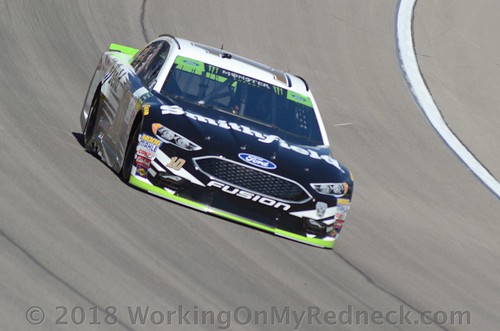 On a day when it was good to have friends, Aric Almirola needed one of those friends to run out of gas on the last lap in order to emerge victorious in NASCAR Overtime in Sunday’s 1000Bulbs.com 500 at Talladega Superspeedway. Almirola pulled in front on the final lap when race leader Kurt Busch ran dry, and Almirola drove away for his first win in the 2018 Monster Energy NASCAR Cup Series season.

For Almirola, it was his second career win in NASCAR’s premier series and it advanced him to the Round of 8 in the NASCAR Playoffs. It also came a week after he fell short to Chase Elliott at Dover International Speedway in a race in which he was competitive up until the end. And it came on a day when Stewart-Haas Racing dominated with all four cars running at the front of the pack for much of the time, including stage wins by Busch and Kevin Harvick.

But a late caution for a wreck involving playoff drivers Alex Bowman and Elliott and three others forced overtime, and that meant not enough fuel for Busch or Harvick, who had to pull to pit road along with Ryan Blaney before the final restart.

Nobody had selected Aric Almirola to win at Talladega, therefore, this award goes back onto the shelf awaiting the results of next weeks Kansas Speedway race.

Talladega has always been referred to as a “Wild Card” race because of the high stakes risks that come from the inevitability of the occurrence of “The Big One” that will happen at this race track. After scouring the scores this week the results would indicate that most of the players escaped fatal scoring injuries!

Edie The Las Vegas Super Star was all by her lonesome this week, betting the farm that Joey Logano would have a great race and reward her handsomely.  As it turned out she was right on this week, bagging 40 points from “Sliced Bread’s” efforts.

This season something has lit a fire under David The Mudslinging Throttle Jockey!  He has kept himself up, or near, the top five on the leaderboard for the first half of this segment, which historically almost never has happened.  Having listed the previous disclaimer I must say that The Mudslinger has had another excellent race, scoring 34 points from Ricky Stenhouse, Jr’s journeyman performance at Talladega.

Also celebrating a reasonably good race is the duo of JIm, aka Chiefy and Bernie The Bay Area Bandit.  Both players put all of their marbles into the marble sack of Mr. Seven-Time, Jimmie Johnson.  Chiefy and The Bandit added 30 points to their 3rd segment totals, keeping both competitive for “the big third segment money payoffs”!

Once again there were two-thirds of the players who relocated to another resting spot on the old totem pole.  The biggest movers of the week is a twosome consisting of Leon Your Most Humble Sheriff and Kathy The Church Forecloser, each moving three (3) positions.  Your Most Humble Sheriff stepped up his game this week moving up three places to sit in 6th place, whereas The Church Forecloser tripped and fell down three places to rest in 18th place.

The next biggest movers is a gaggle of players consisting of Jim, aka Chiefy, Bobby Blue Crush, Carlton The Doorman, Karen The Highly Opinionated Southern Belle, and Ol Skid-Marc all moving two (2) places.  The Doorman had a good day and was able to climb up two places to sit in 12th place this week.  Conversely, Chiefy, Blue Crush, The Highly Opinionated One, and Skidz all dropped like a hot potato losing two spots to control 7th, 10th, 14th, and 21at, respectively.

Lastly, eight players moved next door, one place, when the checkered flag waved at Talladega.  Dan The Numbers Dude, Jeremy The Coach, Doug The Mongoose, Carole, aka Rudy, Linda b. The Lemonade Lefty, Edie The Las Vegas Super Star, and Zee, aka Sissy all climbed up one place to rest in 5th, 9th, 15th, 16th, 17th, 19th, and 20th, respectively.  A&M Aggie Sue didn’ fair so well, losing one place to sit in 8th place.

“The Crappiest Pick of The Week” award gets shared this week by Karen The Highly Opinionated Southern Belle and Ol Skid-Marc.  Both players were really hoping that Chase Elliott could pull off a Talladega win, however, that was not to be this week.  Each player could only muster a score of 10 points!

For the fifth week in a row Lonna The Quilt Angel will occupy “The Outhouse”, however, there is one small change.  This week Ol Skid-Marc has joined The Quilt Angel in The Outhouse, and must share this prestigious award with her.

Check out the results of the 1000Bulbs.com 500 at Talladega.

Next week it is on to Kansas.