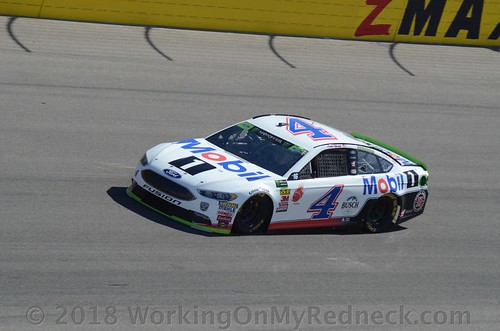 This time, there was no late-race glitch to interrupt Kevin Harvick’s domination of a Monster Energy NASCAR Cup Series race.

Streaking away from pole winner Ryan Blaney during an overtime restart on Lap 336, Harvick won Sunday’s AAA Texas 500 at Texas Motor Speedway with the utmost of authority, sweeping the stages and leading a race-high 177 laps on the way to his series-best eighth victory of the season and a guaranteed spot in the Nov. 18 Championship 4 race at Homestead-Miami Speedway.

The victory was Harvick’s first since Michigan in August, and it broke a streak of bad luck during which the driver of the No. 4 Stewart-Haas Racing Ford led laps but failed to find Victory Lane, thanks to mechanical issues or pit road mistakes.

Scoring the second most points this week was David The Mudslinging Throttle Jockey.  The Mudslinger was riding shotgun with Ryan Blaney at Texas, racked up 51 points, and climbed up into the lead with just two races remaining this year!

Also having a good day at Texas was Bernie The Bay Area Bandit.  The Bandit stowed away inside Ryan Blaney’s hot rod for the duration of the AAA Texas 500, scored 45 points, and only surfaced during the Victory Lane celebration!

Meanwhile, a trio of players, Edie The Las Vegas Super Star, Amber The Extremely Lucky Cheddar Head, as well as Doug The Gandy Candy Man, all racked up 42 points this week

Rounding out the top five scorers this week is a twosome consisting of Linda R. The Lemonade Lefty and Jerry The Buschwacker.  Both players were supporting Aric Almirola this week and added 35 points to their segment totals.

There was widespread movement throughout the leaderboard this week.  In fact, the only players that remained in their previous places were Karen The Highly Opinionated Southern Belle, Edie The Las Vegas Super Star, and Zee, aka Sissy.

The largest mover of the week was Jim, aka Chiefy who dropped like a bad habit six (6) places to land in 11th place.

Not too far behind Chiefy was Lonna The Quilt Angel and Carole, aka Rudy moving four (4) places this week.  The Quilt Angel is making her late segment surge towards the middle of the pack, landing this week in 14th place, whereas Rudy is dropping like a hot potato, landing in 19th place.

The foursome consisting of Amber The Cheddar Head, Bobby Blue Crush, Jerry The Buschwacker, and Linda B. The Cookie Mom all moved three (3) spots when the checkered flag fell at Texas.  The Cheddar Head, Blue Crush, as well as The Buschwacker all stepped up their game and their positions three places to sit in 4th, 6th, and 7th, respectively.  Conversely, The Cookie Mom tumbled three places to land in 16th place.

The quintet, Snoopy Dawn, Dan the Numbers Cruncher, A&M Aggie Sue, Jeremy The Coach, and Kathy The Church Forecloser moved just two (2) places at the end of the race.  Aggie Sue and The Church Forecloser moved up two places to reside in 9th and 18th, respectively.  However, Snoopy Dawn, The Numbers Dude, and The Coach stumbled down the scoring pu=ylon to rest in 3rd, 8th, and 10th, respectively.

The remaining six players all moved up or down one spot when the dust settled.

The Crappiest Pick of The Week goes to Carole, aka Rudy, this week who racked up a single digit, just 7 points total.

For the second week in a row Zee, aka Sissy, is in total control of The Outhouse, with just a very small challenge from The Las Vegas Super Star!

Next week all three series travel one last time out the Valley of The Sun, Phoenix, AZ and the brand new reconfigured ISM Raceway!  With the new reconfiguration, the front straight becomes the back straight. The start/finish line is now near of back dogleg and the race track will really race very differently!  Even though ISM Raceway will race like a brand new track it will continue to do what it has always done, shatter some racer’s championship dreams!

Check out the results of the AAA Texas 500 at the Texas Motor Speedway.