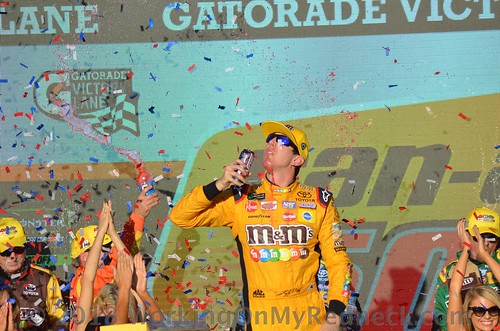 Holding off Brad Keselowski after a restart with 12 laps left in Sunday’s Can-Am 500 at ISM Raceway, Kyle Busch claimed his eighth Monster Energy NASCAR Cup Series victory of the season and led NASCAR’s Big Three into the Championship 4 race at Homestead-Miami Speedway.

After a wreck on Lap 269 of 312 ended the championship hopes of Kurt Busch and Chase Elliott—both of whom had been in the mix throughout the day—Busch grabbed the lead from Joe Gibbs Racing teammate Erik Jones on Lap 277 and held it the rest of the way, through two subsequent cautions and restarts.

Busch’s victory, the 51st of his career and his second at the one-mile track—coming 13 years after his first one—tied him for the series lead with Kevin Harvick, who had to overcome an early flat tire to join Busch, Martinsville winner Joey Logano and Martin Truex Jr. (14th on Sunday) in the Championship 4.

It seems like most everybody has used their Kyle Busch choice already.  Not a single player had KyBu at Phoenix, so this award goes back into the closet til the checkered flag flies next week at Homestead.

Additionally, Lonna The Quilt Angel and Carole, aka Rudy, were supporting “The Rocket Man”, Ryan Newman.  Both were hoping that Newman could have repeated his ISM Raceway victory in 2017.

Lastly, Leon Your Most Humble Sheriff and Ol Skid-Marc were rooting for “That Jones Boy”, Erik, at ISM Raceway.  On the last restart EJ started on the front row, but with old used up tires, he faded back to finish the race in 17th place.  Nevertheless, this pair added a nifty 23 points to their totals.

Once again almost everyone on the ol totem pole exchanged places when the Sun set in Phoenix.  The only players who remained in their previous places were our leader David The Mudslinging Throttle Jockey, Lonna The Quilt Angel, Edie The Las Vegas Super Star, as well as Zee, aka Sissy.

The biggest movers of the week are Jim, aka Chiefy, Karen The Highly Opinionated Southern Belle, Carlton The Doorman, and Jeremy The Coach., moving four (4) places this week.  Chiefy, The Highly Opinionated One, and The Doorman each scurried up the leaderboard four spots to sit in 7th, 8th, and 11th, respectively.  But The Coach was not so lucky this week, falling four spots to rest in 14th place.

There is still another foursome who moved two (2) places on the scoring pylon.  Those four players include Amber The Extremely Lucky Cheddar Head, Jerry The Buschwacker,  Dan The Numbers Cruncher, and Kathy The Church Forecloser.  Both The Cheddar Head and the Church Forecloser stepped up their game moving up two spots to sit in 2nd and 15th places, respectively.  Conversely, The Buschwacker and The Numbers Dude tumbled two spots to park themselves in 9th and 10th, respectively.

The rest of the players either moved up or down one position this week.

This week Doug The Gandy Candy Man, with his microscopic one point, has earned “The Crappiest PIck of The Week” award singlehandedly!

Additionally, Zee, aka Sissy, remains firmly entrenched in “The Outhouse” this week!

So after the checkered flag flew at ISM Raceway Kyle Busch, Kevin Harvick, Martin Truex, Jr., and Joey Logano remain in the hunt for the 2018 MENCS championship this weekend at Homestead.  Those four can “dream on”!

Check out the results of the Can-Am 500k at ISM Raceway.