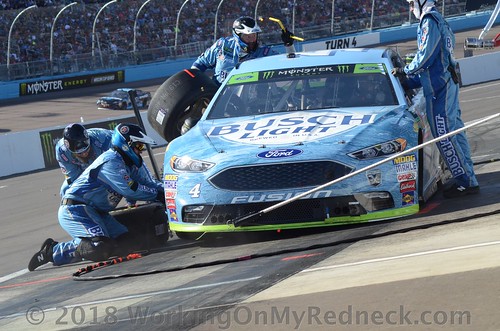 Well, the race season has finally wound down to the Championship Weekend at Homestead.  Where did the 38 weeks go?  The season started about 200 miles North of Homestead at “The World Center of Speed” at Daytona International Speedway back in mid-February, and here it is mid-November.

There is just one last chance for the Final Four to realize their dreams!  It all comes down to who will power through all the pressure and perform impeccably under the most pressure to date!

There are six drivers that have more than one rooter this week.  But the big fish this week is one of “The Big Three”, Kevin Harvick!  Supporting this big fish in the finale of 2018 is Bobby Blue Crush, David The Mudslinging Throttle Jockey, and of course, Leon Your Most Humbel Sheriff!  Two of the three players, Blue Crush, and Your Most Humble Sheriff could really use a win at Homestead.  The Mudslinger most likely could hang onto his lead, even if Harvick did poorly Sunday.

Linda B. The Cookie Mom and Doug The Gandy Candy Man are united in their support for William Clyde Elliott, Jr., aka Chase.  Could Chase be a race and championship spoiler at Homestead?  Stay tuned that could be a very interesting storyline Sunday!

However, Jim, aka Chiefy, and Jeremy The Coach has a very different take on the results that they are looking for on Sunday.  Both players are rooting for Denny Hamlin to be the darkhorse winner at Homestead.

But A&M Aggie Sue and Ol Skid-Marc have a very different view of what they want to see as the finality at Homestead.  Both players are staunchly behind their driver, Mr. Seven-Time, Jimmie Johnson.  They are hoping that ol JJ can end the season on a high note, a victory at Homestead!

Laying low and below the radar are Kathy The Church Forecloser and Bernie The Bay Area Bandit.  Both ladies are riding shotgun with “That Jones Boy”, Erk.

Lastly, Lonna The Quilt Angel and Snoopy Dawn are joining forces to back “Young Money”, Kyle Larson, for the win at the season finale.

Slightly more than one-third of The Redneck Fantasy League, nine players in total, are in bidnez for themselves for the last race!

Sunday evening there will be just one driver and team that will be fully engulfed in their “river of dreams”!