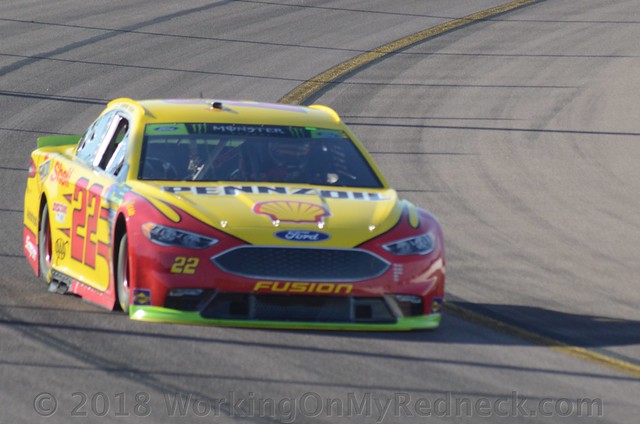 Logano’s triumph came as redemption after a heartbreaking absence from the playoff picture last season. Logano won just once in 2017, and that victory was obscured by a post-race penalty that negated an automatic championship berth.

“We did it! We won the championship! I can’t believe it,” Logano said after emerging from his car. “I don’t know what to say. This team, Roger Penske, Todd Gordon, the pit crew. Oh my God. They gave me the car I needed at the end to do my job. Put me in position to do my job. I couldn’t be more proud of them.”

Well, Zee, aka Sissy, saved up her Joey Logano pick to make it really count.  “Sliced Bread”, Joey Logano, won this race, won the 2018 MENCS championship and deposited 40 points into Sissy’s third segment totals.  As it happens from time to time, the winner of the race didn’t produce the most points for a player!

For the last race of the season, Snoopy Dawn emerges as the weekly highest scorer.  Ol Snoopy was riding shotgun this weekend with the only dude that could run 400 miles within an inch of the fence, and not wad up his hot rod, “Young Money”, Kyle Larson!  The reward for Snoopy was a very cool 43 points and ten chewed up fingernails!

Following Sissy on the scoring pylon is a very mismatched quartet of players scoring 34 points from two different drivers!  Those four players include Leon Your Most Humble Sheriff, Bobby Blue Crush, David The Mudslinging Throttle Jockey, and Edie The Las Vegas Super Star.  Your Most Humble Sheriff, Blue Crush, and The Mudslinging Throttle Jockey all were letting it all ride on “Freaky Fast” Kevin Harvick, while The Las Vegas Super Star was betting the farm on “Blazingly Bad” Brad Keselowski.  All four players racked up 34 points to end the segment.

Meanwhile, a wacky duo was the fourth highest scorers, adding 33 points to their totals.  These two players are Jim, aka Chiefy and Jeremy The Coach putting all their marbles in the marble sack of “The Delivernator”, Denny Hamlin.

Because the leaderboard was fairly compact, in referencing the scores, nineteen of the twenty-two players swapped places to end the segment.  The only players who remained in their previous places were the 3rd segment winner, The Mudslinging Throttle Jockey.  Yep, everyone take notice that The Mudslinger finally broke through from his normal backmarker residence!  In fact, he was the very first winner of The Outhouse Award when this was first instituted a few years back and obviously felt much more comfortable trying to come from behind!  The other two players who did not change places were the two ladies who have hovered around The Outhouse all segment, Zee, aka Sissy and Edie The Las Vegas Super Star!

The biggest mover of the week is Bernie The Bay Area Bandit.  The Bandit had a really bad day at the races plummeting six (6) places to fall into 9th place.

The husband-wife duo of Snoopy Dawn and Carlton The Doorman moved four (4) spots this week.  Snoopy was moving in the right direction stepping up to the pay window in 2nd place!  The Doorman was not so fortunate, dropping like a hot potato four places to sit in 15th place.

Additionally, Dan The Numbers Dude and Carole, aka Rudy dropped two positions to sit in 12th and 20th, respectively.

The remaining 11 players all moved up or down one position this week.

With this race being the end of the season, The Crappiest PIck of The Week goes to Carole, aka Rudy.  When you can only gather up a single digit to add to your totals you can be assured that you are in the running for The Crappiest Pick of The Week award.  So Rudy could only muster up one itty-bitty point this week and she takes this award witrh her to ponder for the offseason!

To end the season Zee, aka Sissy, can take the next 93 days off and keep The Outhouse in good shape and ready for another inhabitant at the beginning of the 2019 season!

Check out the results of the Ford EcoBoost 400 at Homestead-Miami Speedway.

TIL NEX TIME, PULL YOUR GLOVES UP, FLIP YOUR VISOR DOWN, AND LET’S GO RACIN’!