Well, it took six weeks to finally wrestle “The Outhouse Award” plaque away from the grasp of Bernie The Bay Area Bandit!  This plaque is so prestigious that she was not willing to part with it at the beginning of the second segment.

Even though she is not willing to “expose” her real identity, nor to relinquish the award on time, with the aid of the local authorities and the power invested in me as “Your Most Humble Sheriff” I was able to separate The Bay Area Bandit and The Outhouse Award.  Now I can ship this award to the new recipient and allow her the privilege of the companionship of this prestigious award!

I noticed that The Bay Area Bandit appears to let us all know that she thinks that we are all number one in her world! 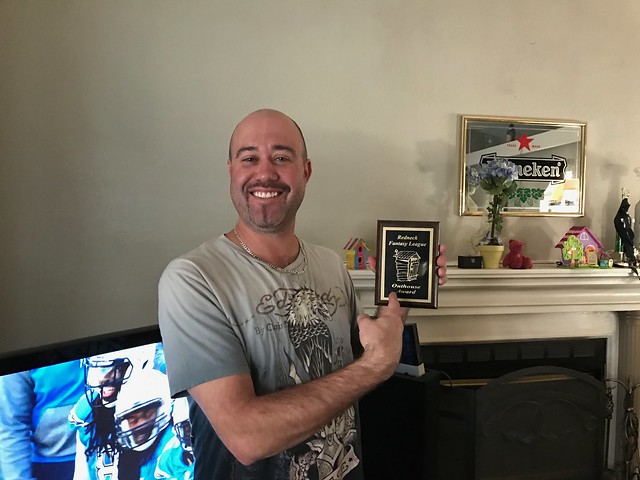 Well, it looks like Jeremy The Coach is excited to be looking at The Outhouse Award til we go back racing in 2017!  As you can see not only is excited about being the 3rd Segment recipient, he appears to be rubbing it in everyone’s face that he has the plaque and we don’t! The good thing about The Coach winning “The Outhouse Award Award” is it did not travel any distance between the 2nd Segment winner, Cole The On Demand Baseball Player, and his father, Jeremy The Coach!  That save yours truly the shipping charges for transfer of ownership  The plaque remained in Fresno, CA after it’s brief tenure in Florida. Just look at the pride he is exuding! 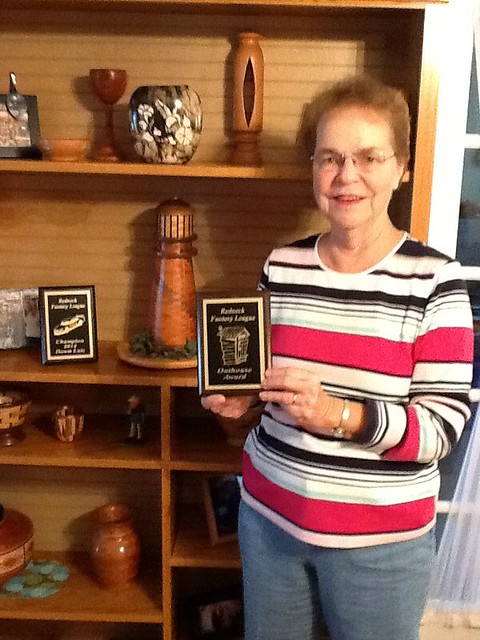 She went from the Penthouse to the Outhouse in just one year!  Last year Dawn Lutz, aka Snoopy, was our 2014 champion for scoring the most total points throughout the year.  However, Snoopy, fell from her perch to wallow in The Outhouse for segment #3!

If you notice in the above photo she is really coveting this award (The Outhouse Award) more than her 2014 championship plaque that is on the bookcase to her right side!

Just think this award could be coming to your household this year, nobody is excluded! 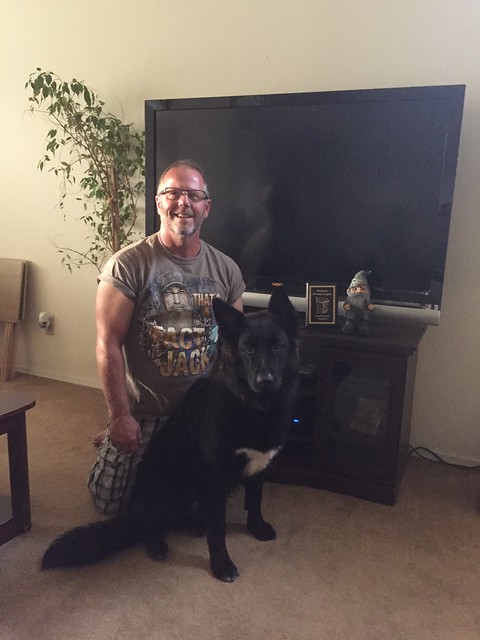 Well, here is a photo of Marc our second segment Outhouse Award winner! As you can see Marc incorporated his closest confidant and Redneck Fantasy League advisor Onyx the wonder dog!  Now I am not supposed to let this out, but a source close the The Redneck Fanatsy League Private Investgator has it that, in fact, Onyx has made most of Marc’s pics this season. Maybe that is why Marc scored 100 points less than the second segment winner, Edie, did!

Notice Onyx dressed up in his black fir tux for the “coming out” photo.  You can also see that Marc donned his elegant Duck Dynasty T-shirt with his coordinated formal plaid PJ bottoms for this photo!  Yes sir, it is quite obvious that Marc and Onyx feel priviledged and honored to be the 2015 second segment Outhouse Award winner!

PS Even the Gnome is tickled to death to have the Outhouse Award setting next to him alongside the family TV! 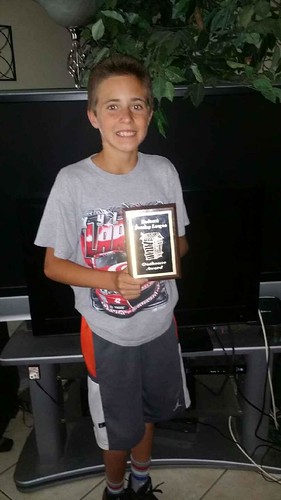 This is the 2015 First Segment Outhouse Award winner, and first time participant, Cole The Natural! It is great to see that he is carrying on the Redenck Fantasy League Tradition, and Family tradition as well, of be being extremely overjoyed with this prized award!

Cole has set a record of being the youngest ever Outhouse Award winner in the history of The Redneck Fantasy League!  Cole is just 12 years old!

As with all the previous Outhouse Award winners, Cole was so excited and proud to receive this award of total non-excellence that it was so very hard for him to hide that excitement from the camera!

Still another first for The Redneck Fantasy League was that both the segment #1 winner, as well as the Outhouse Award are residing within the same household!

Still to be seen is whether Cole can perfect his NASCAR picks technique quickly! 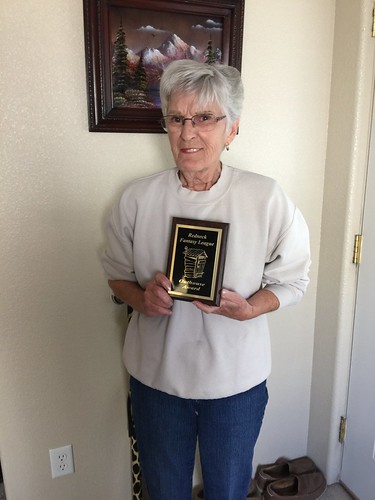 After getting the typo fixed on our “Outhouse Award” plaque fixed, I have finally delivered this prestigious plaque to the 2014 Segment Number Three winner, Edie!

Like most of the previous recipients, Edie was totally thrilled, and it is totally obvious by the toothy grin she is showing, to receive this plaque that rewards the person who has exhibited a total inability to pick weekly winners.

Nevertheless, It may extremely difficult to pry this plaque from her hands at the end of the first segment this year!  She will be no different than “Jerry The Buschwacker” was after his reign, that is, they just do not want to relinquish control of “The Outhouse Award” plaque!

I am not sure what Edie’s technique was for picking winners last year, but it will be interesting to see if she alters her technique for the coming year. 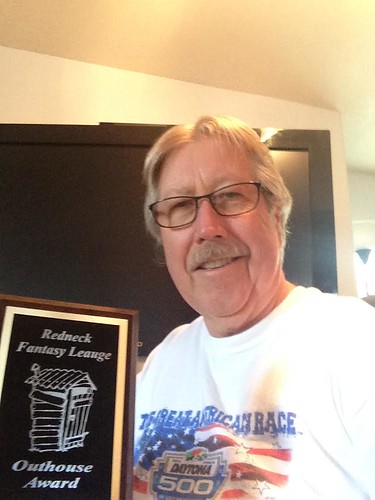 Well it finally happened!  “Leon The Retired Airline Captain, Part-Time Cardiologist and Strawberry Picker, Former Elephant Driver, and Your Most Humble Sheriff, aka Captain Blowdri” finally hit the skids!  For the past seven or eight years “The Outhouse” was one destination that “Captain Blowdri” had not visited!  Many may think that, just because “The Sheriff” ran The Redneck Fantasy League, that maybe he “cooked the books”!  But oh contrare my friends, this is proof positive that even the “sector director” can have a rotten segment, resulting in winning “The Outhouse Award” for the second segment of 2014.

To illustrate the value of this award, and even though I won this award fair and square, “Jerry The Buschwacker” was not willing to part with this prestigious ward any too quickly, resulting in this plaque being about five weeks late in arrival!  (I really had to twist his arm to get him to mail the plaque to me!)

Looking at the last three “Outhouse Award” winners, there is one common denominator between the three, the last name!  The last three winners all have the same last name, Hammack!  Can we get a little help here? How about a little “courtesy bark”, or something?

I guess my “scientific” approach to picking winners really did not work for the second segment of 2014, did it?  Maybe next year I will revert back to my previous technique of quizzing the drunks on skid row and coming up with my twelve picks! 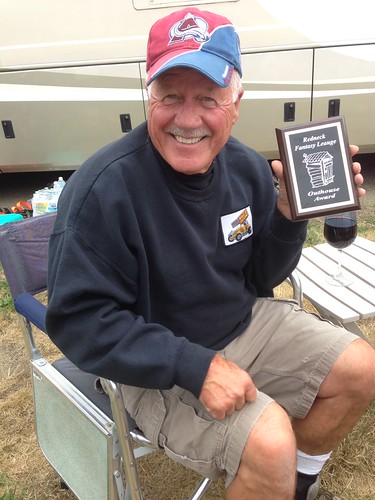 “Jerry The Buschwacker” has started out the first segment of the 2014 Redneck Fantasy League with a huge splash!  His total lack of expertise in selecting winners resulted in him securing a few “crappiest picks of the week” awards, those small imperfections landed him squarely in “The Outhouse” for the first segment of 2014.

“Jerry The Buschwacker” replaced his sister, Zee, as “The Ogre of The Outhouse”, “The Prince of The Poophouse”!

Notice how he poses for this picture.  He is showing his pride in the way that he covets this prestigious award that acknowledges the total ineptitude, and the inability to pick winners on a weekly basis! Here is our third recipient of “The Outhouse Award” for 2013.  For those who may not recognize the picture, this my sister Zee.  Zee continuously showed, in segment three, that she could, week in and week out, have the crappiest picks for that week.  With that kind of cumultive talent she won, going away I might add, “The Outhouse Award” for the third segment of 2013!

Zee has followed, and filled the driving shoes quite adequately of the initial recipient, “David The Mudslinging Throttle Jockey”! May I introduce the 2013 first segment “Outhouse Award” winner, “David The Mudslinging Throttle Jockey”! Notice how he takes pride in having this prestigious award!  It is quite a feat to be the first at being last!

Just think, you too can have this lovely plaque beside your TV just for having the crappiest picks of the segment!